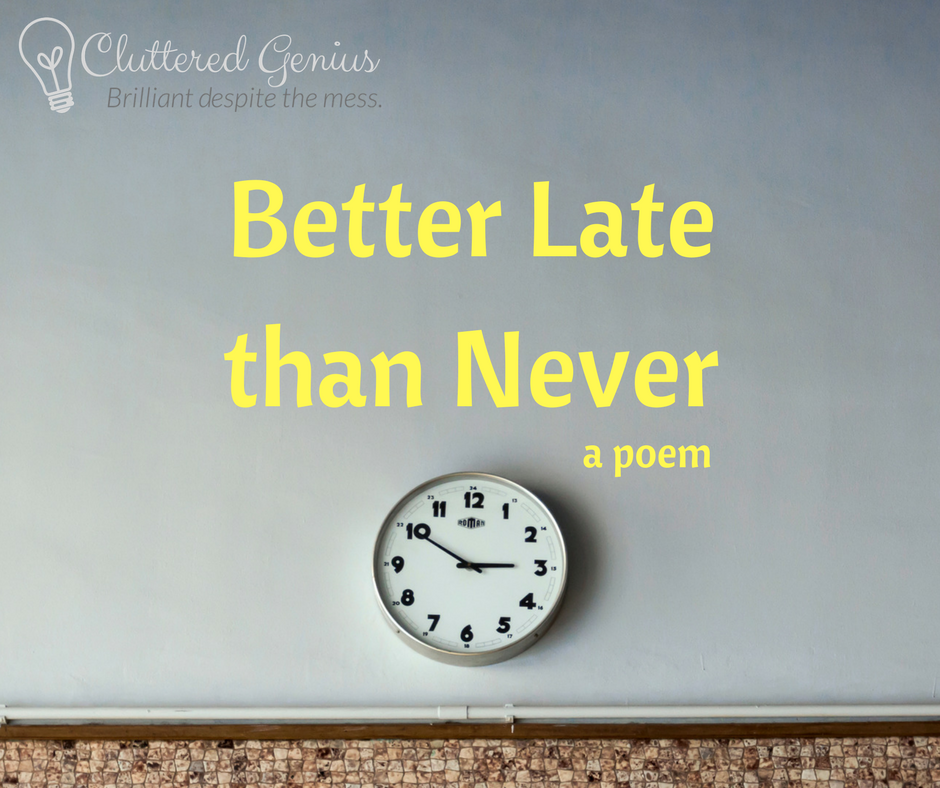 September 5th is Be Late for Something Day. What better way to celebrate than to wait 8 days to write a poetry all about being late?

This month, our blogging friends poetry theme is all about being late. This isn’t too hard for me to think about. I’m rarely actually late, but boy do I procrastinate! (There’s a teaser rhyme for you.)

In fact, I hate being late. I’m known to start getting ready well in advance and then sit around all dressed and ready to go. At least I used to be like that before I had kids. Now I run around like a chicken with my head cut off trying to get everyone ready while pretending I match or have decent hair. We’re later than I’d like to be for most events, but it’s better than I would have expected for six of us leaving the house at the same time.

I’m a procrastinator. Truth is, however, that my procrastination takes a different form than what I consider “typical” procrastination. I may not complete a task prior to the deadline, but you can believe that I’ve been thinking about it the whole time. Technically, although the project isn’t on paper somewhere, there are file folders in my brain setting up the plan.

This usually goes unnoticed by the unknowing eye. Generally a project that I adore will be completed quickly and way ahead of schedule. I have also learned to prioritize projects so that those that are on fire are resolved first. And those that have an immediate effect on people other than ME will make it to the top of that list.

When I’m working with a group, I hate to be the one who holds everyone up. I’ve been guilty of that with my blogging buddies, so this poem is dedicated to them.

My tendency toward procrastination
creates a situation
prime for stress
a head that’s a mess
more distress
a need for vacation.

Or maybe a muse in this tardy station —
at least according to Karen
who agrees that it’s rather daring
to wait, not sparing
my bloggy friends’ feelings of anticipation.

This life takes over and causes frustration
removes my ability to write at will
the kids won’t let me create, but still
I find a moment here and there to kill
two birds with one stone: Elation!

Ok, that was a bit of a stretch – but you get the idea.

Happy belated Be Late for Something Day!

Check out the poems from my buddies!

5 thoughts on “Better Late than Never”