My very own coffee corner 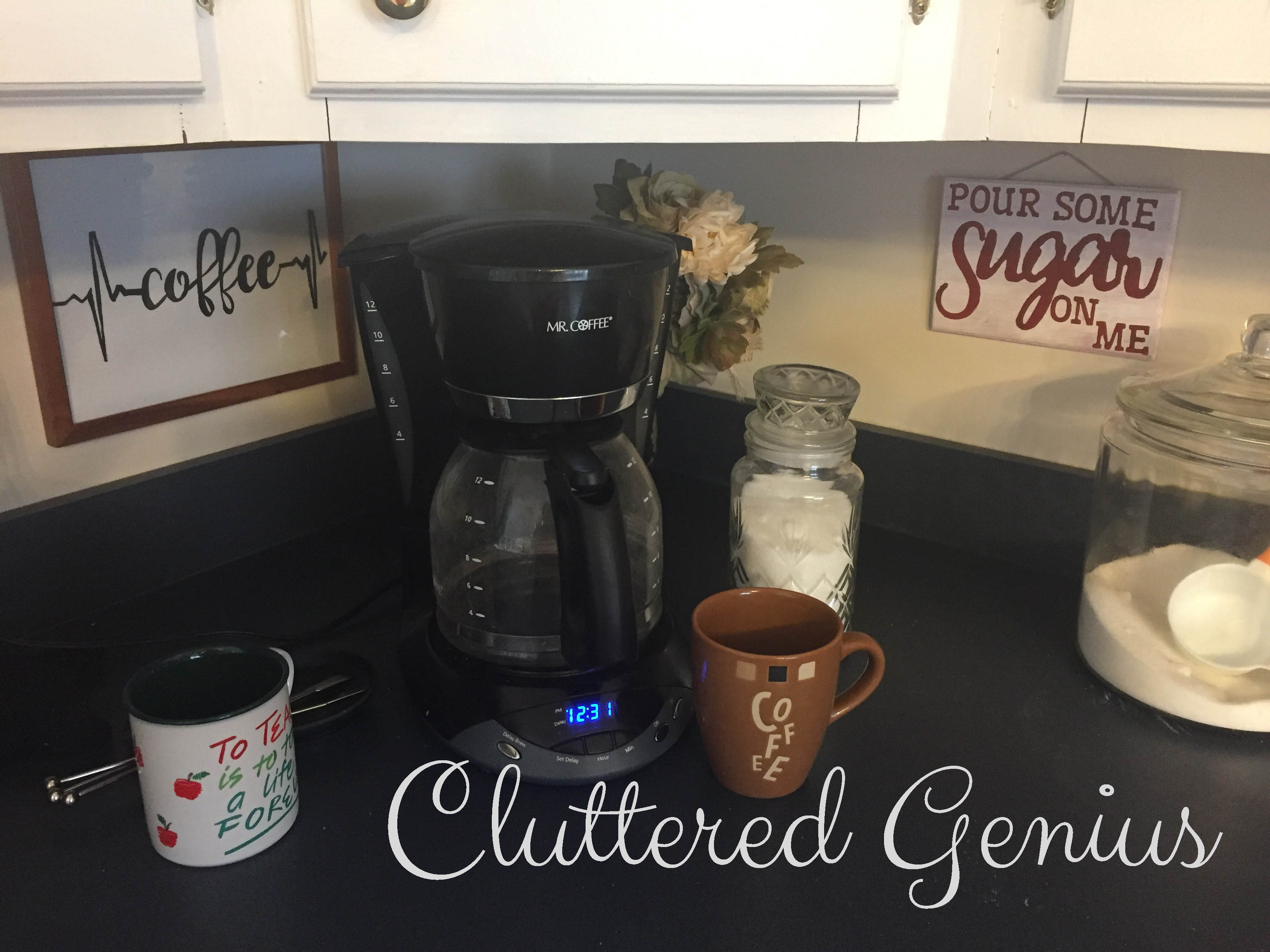 Last spring, we moved in to a new-to-us house. It’s not new at all, actually. It’s over 100 years old, and it belonged to my grandparents and then my parents. I had the distinct honor of “switching” houses with my Mom and Dad (really, we just bought each other’s houses), and now the pleasure of redecorating the beautiful old house into something that felt like ours. It’s hard to do when you’ve been in and out of a house to visit or live as a teenager for the last twenty-five years. One of the first elements of making this house “ours” was to create our very own coffee corner.

I don’t even really like coffee, but I like the adulting that goes along with it. Plus, caffeine. Math Man drinks it, so it’s sort of a bonding moment in the morning. I will also admit to now really wanting it plus silence any chance I get. The shocker is that a few nights ago, after playing the snow, I brewed a pot for us to drink. That’s extremely abnormal for me, but the hot chocolate packs were limited and kids win.

The first location we had for our coffee was where Mom and Dad had theirs when they lived here. It just seemed natural to use the same location. It worked for them, so it could work for us. What I realized after a while was that, because that portion of the kitchen counters was right next to the sink, it continued to overflow with dishes and other I’ll-get-to-it-in-a-bit items. This made my coffee area un-pretty.

I had the grand idea to move both the coffee and the coffee pot over to the large corner of the counters on the complete opposite side of the kitchen. It felt weird at first because that space is huge. But it caused me to rearrange the counters. Amazingly, the counters have (mostly) stayed cleaned off and organized since the change of location.

Next, I needed some signs. I had some from the old house where I’d decorated over those kitchen cabinets. There was space above that cried for decor, so I went with coffee and flowers. It was cute. In this house, there’s no over-the-cabinet space to use, so all of that decor ended up in the living room (still cute). But I had a couple of coffee signs, and I thought maybe we could use them in the kitchen.

After searching Pinterest for inspiration, I was caught by a sign that paid homage to Def Leppard’s, “Pour Some Sugar on Me.” That was, hands down, my first crafting venture.

I started by painting a piece of wood with the color I wanted coming through in the end. Because I have reds in my kitchen, I used a burgundy-ish color. 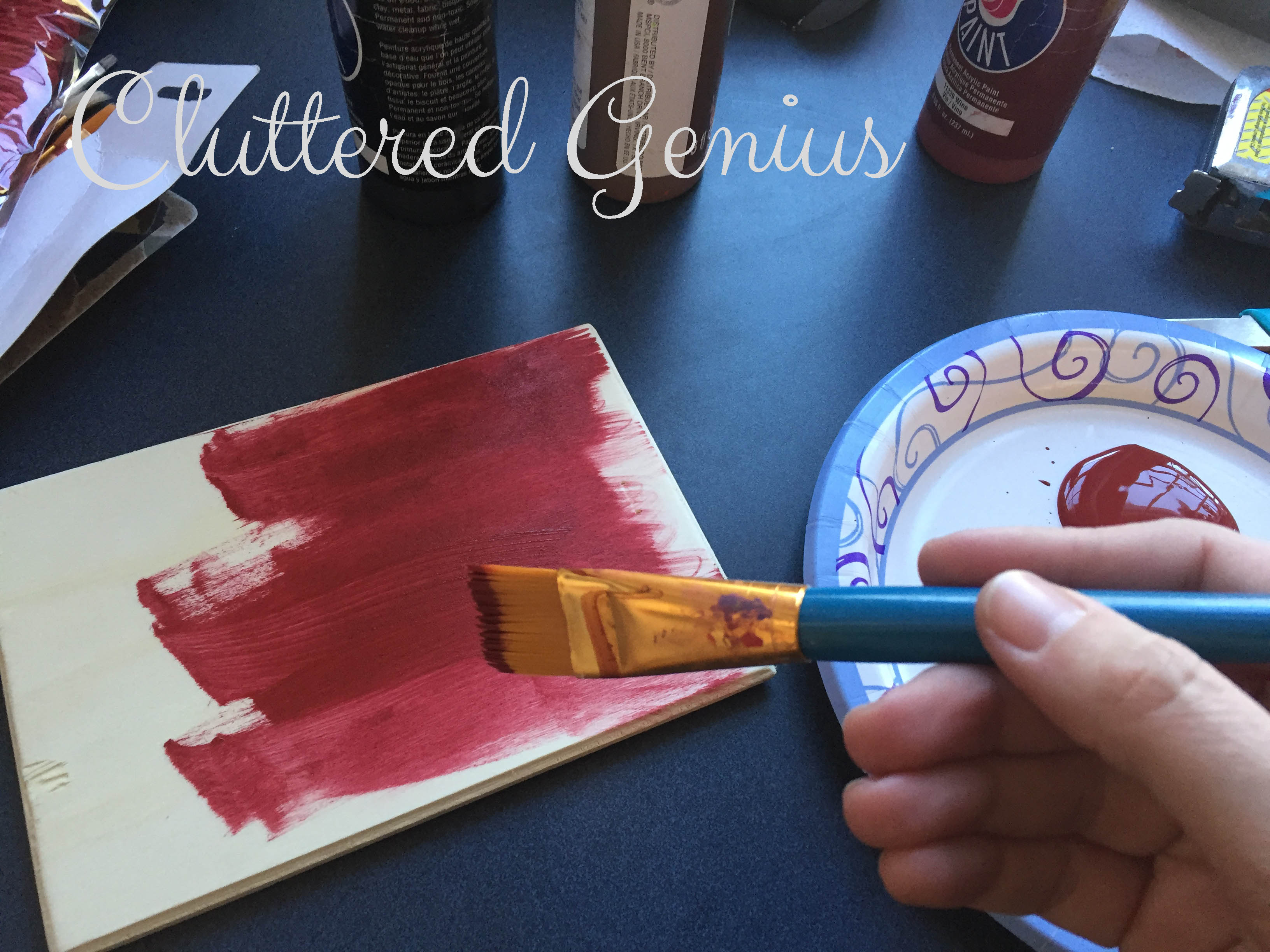 Then, I added stickers in the style I liked. I wanted “sugar” to show up bigger, so I used a fancier and larger sticker there. What was cool about this part of the process was that I had these alphabet stickers left over from my parents’ 50th anniversary. I wasn’t sure what I was going to do with them. Problem solved. 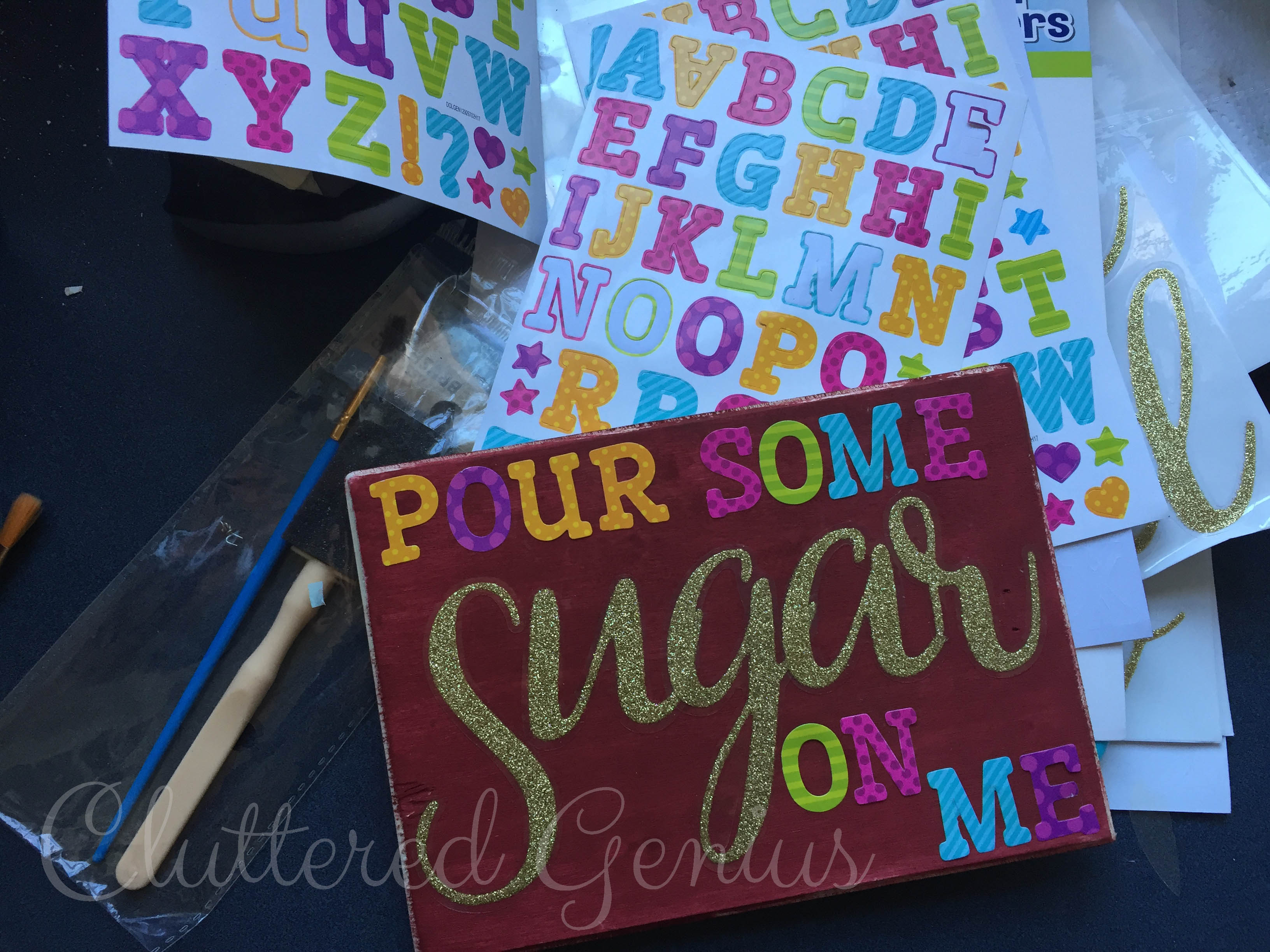 Once the stickers were applied, I painted over in white. I didn’t take too much care to make the painting look perfect or too smooth since the new life of the kitchen is sort of a farm house look.

After I let things dry for a couple of minutes, I removed the stickers. I have to admit that I was freakishly proud of the outcome. I did have to tidy up some of the lines, so I did that with a thinner paint brush and some of the burgundy paint. 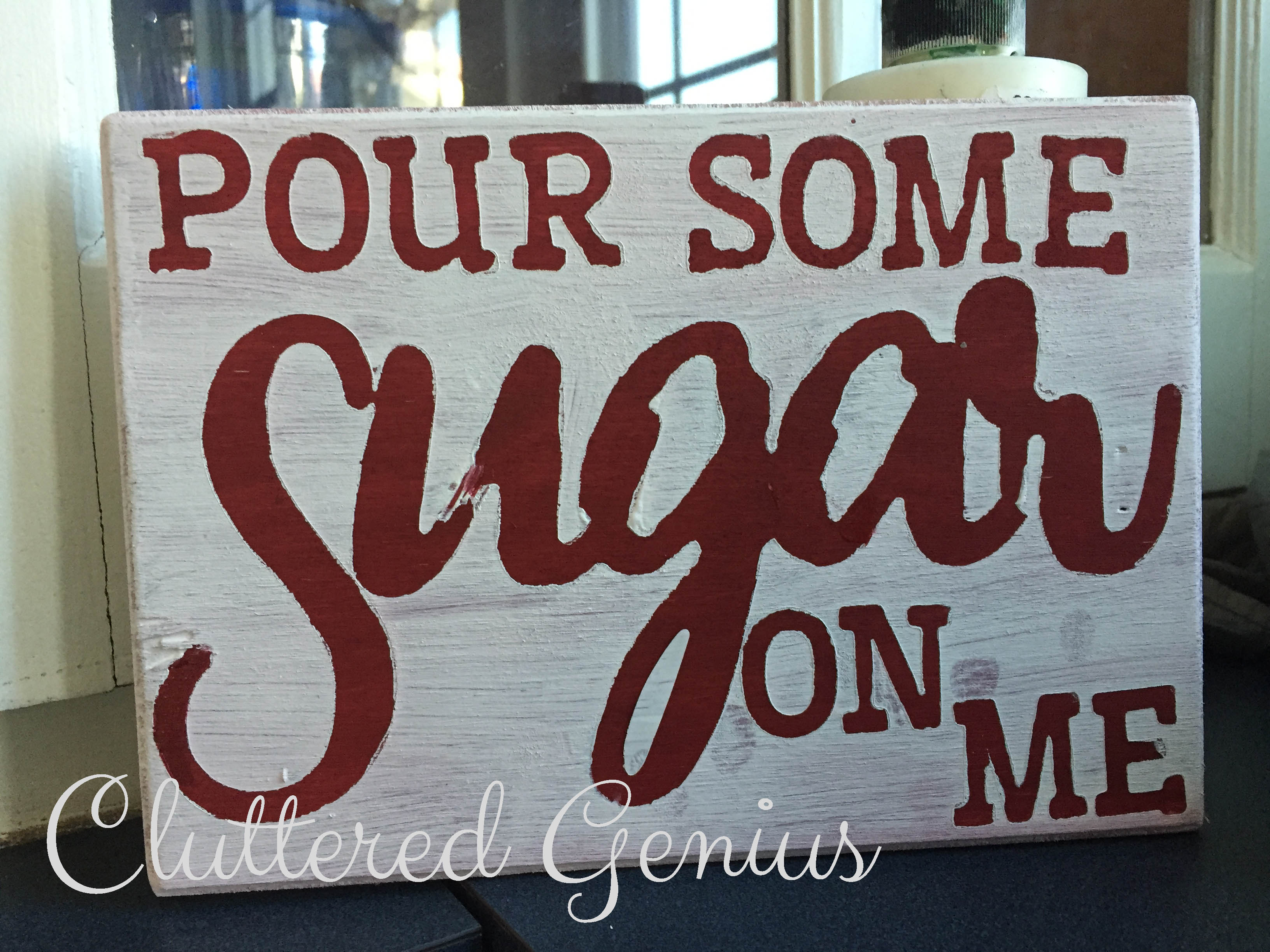 The sugar sign is awesome, but the area around the coffee maker just needed something else. The coffee sign that I had from the old house wasn’t fitting the style that our new kitchen was taking on, so I needed another idea. Back to Pinterest I went.

Math Man and I are all about funny sayings, but there’s a fine line between funny and inappropriate. There’s also a fine line between cute signs and going overboard. With that in mind, I wanted something that still had to do with coffee but wouldn’t add more “dork” to my kitchen…I have enough of that naturally as it is.

I found a pulse line with coffee in the center, and I knew that’s what I needed to do. I created it in Photoshop using the pin for inspiration. Then, I laid the glass from the frame over it. I used a dry erase marker to write backwards and get my pattern. 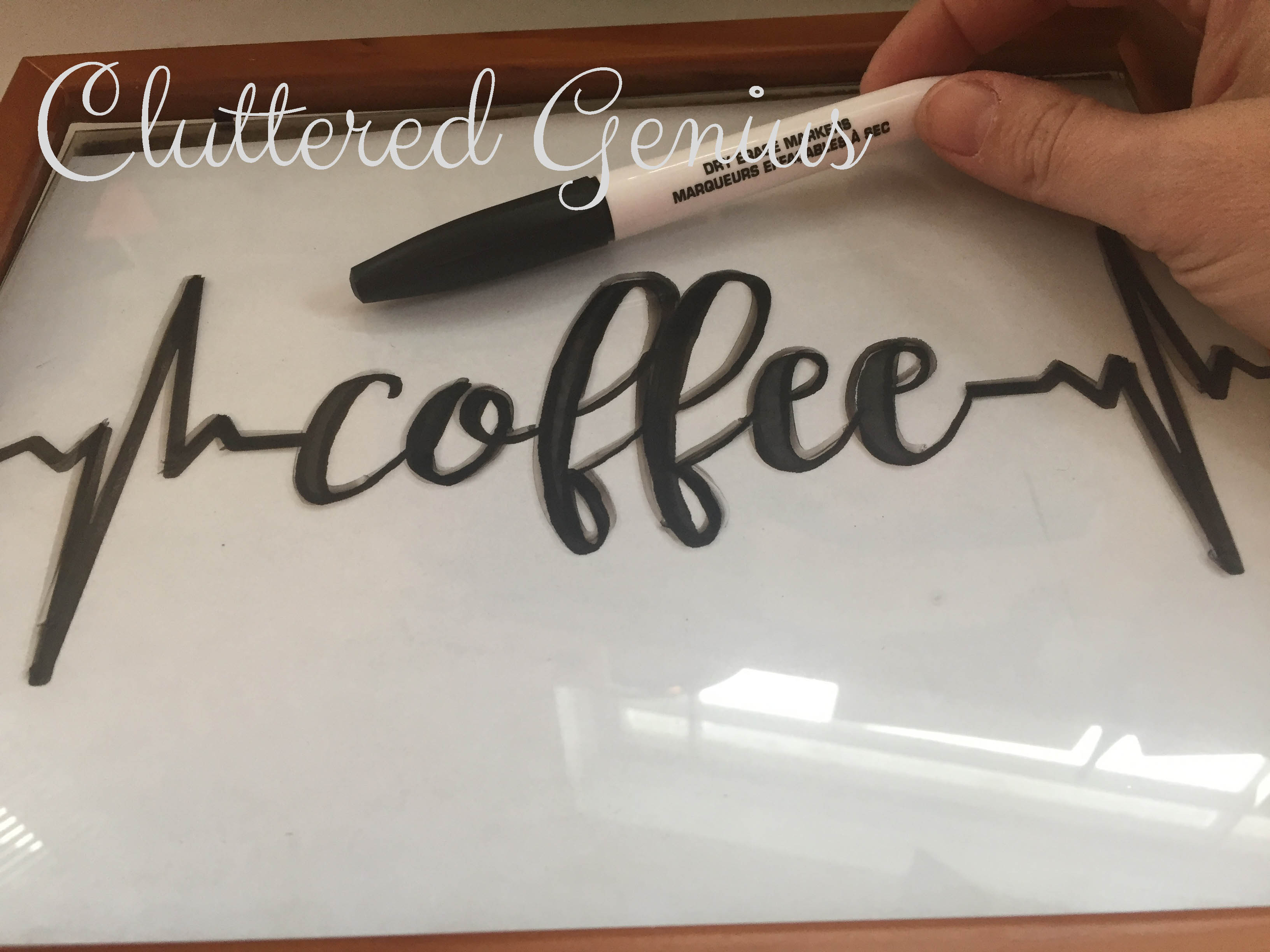 After I had drawn the basic design with the erasable marker, it was time to paint. I simply turned the glass over and used my paint markers to fill in the design. It was fun, but I noticed I had to be really careful if I went back over any lines. They were erasing each other if I wasn’t careful. 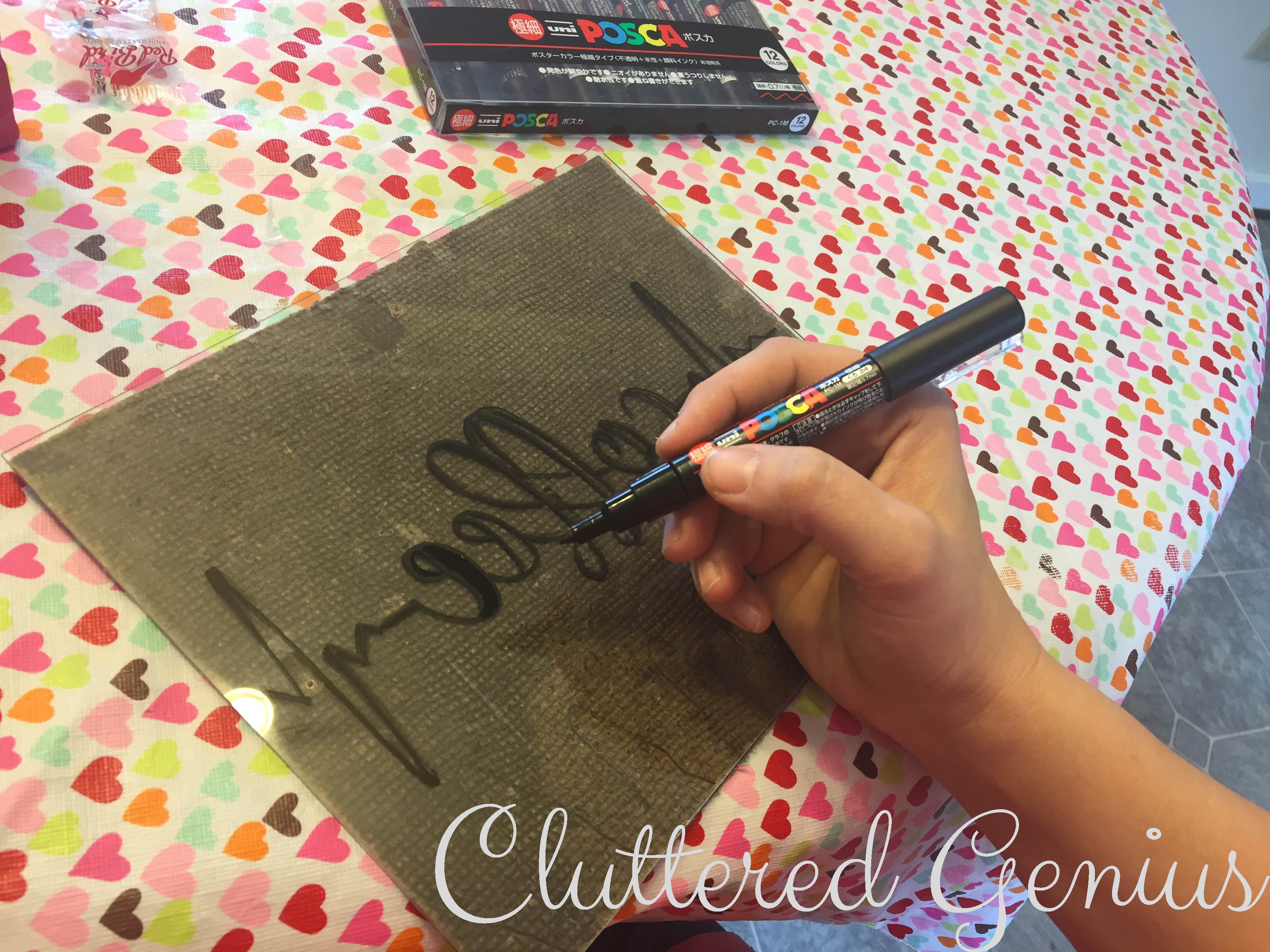 After I was done painting the back, I simply erased what was on the front, added a white page behind (so you couldn’t see the ugly back of the picture frame like in the image above), and put in the frame. It’s perfect!

Now, I have this awesome corner of the kitchen that finally meets my goals and hopes and dreams. Honestly, I am just excited to see everything coming together. Having already created the Jesus sign and the window garden, this next step really has helped me feel like we’re making this house our own!

4 thoughts on “My very own coffee corner”