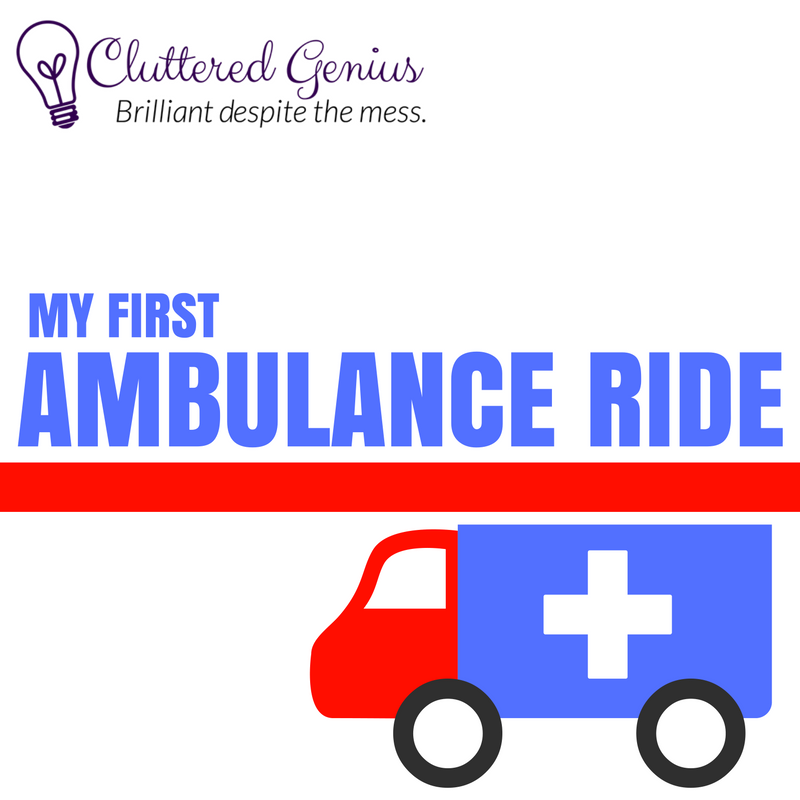 In July, I had my first ambulance ride ever. I actually had the chance to see all the controls and gadgets and chat with the driver as we rushed, sirens and lights blaring, to the nearest and best neurology doctor. My mom was on her way to emergency brain surgery.

Let me back up a second.

In January, mom fell and didn’t realize the extent of her injuries. Having fallen in the middle of the night because of some blood pressure medication that didn’t really suit her body chemistry well, she cleaned herself up and went back to sleep. She attributed the fall to a mishap, did go to her doctor who didn’t do much else but say, “If you have headaches that don’t stop, we might need an MRI,” and went to check in with the dentist to be sure she wouldn’t need any sort of reconstructive help to the lip she’d bitten (almost) straight through.

As weeks passed and her bruises and pain began to diminish, the headaches came and went. Again, she attributed this pain to sinus pressure (we live in the South where no one knows what the weather or pollen will do).

But in June, she began to be a little “strange.” My mom (whose age I won’t reveal but who most definitely looks one if not TWO decades younger than she is) is not a wispy ol’ grandma. She’s a sprightly, roll-on-the-ground-with-the-grandkids kind of go-getter. When she began to show more disinterest in playing or was starting to forget more than she remembered, Math Man and I raised our eyebrows. Having never experienced anything like this before, we just assumed she was either a) happily settling in to retirement and the lack of responsibility that allowed or b) getting older and thus acting like an older person.

July brought about the massive changes in her behavior. Short term memory almost gone. Listing to the side when she walked. Dropping her glass of water. Seeming to be out of her element. It was weird.

But one night during VBS, she was exceptionally different, and I couldn’t ignore it anymore. I called in my dad and sister to help intervene and create a plan. An MRI was (finally) scheduled, and they found a massive subdural hematoma (in case you’re not sure — that’s a massive brain bleed).

Thus, the rush in the ambulance to a more equipped hospital where she could receive the neurological help she needed.

The doctor showed us the scans, and told us about her options. She might have to just have two burr holes. She might have to have a craniotomy. She was scared. We were scared. But if we didn’t get her this surgery now, it could mean eventually slipping in to a coma and then the worst. It was a very long night.

I stayed with her overnight that first night. She was in excruciating pain despite the medication they’d given her. In the morning, they were able to drain that bleed with two burr holes (thank goodness) and she got off with just a cool side mohawk.

Within minutes of waking up from her anesthesia, my mom was mostly back. She hadn’t yet done a 180, but she was coming back at us with smart aleck quips and fast thinking. (And just for the record, she’s finally completed that 180. My mom is back.)

What did I learn from this adventure?

Mom is doing great now. Sure, I still pick on her for being an “air head” (seriously, there’s still space between her brain and cranium where the blood was pushing down), but I am so happy to know that she’s back and doing so well.

As a first ambulance ride, it was horrible. Somehow, I was able to watch from outside my own body and appreciate the amazing resources we have at our fingertips. Thankful, once again, for the crew that helped Mom stay as comfortable as possible on what could have been an even more frightening day.

One thought on “My first ambulance ride”