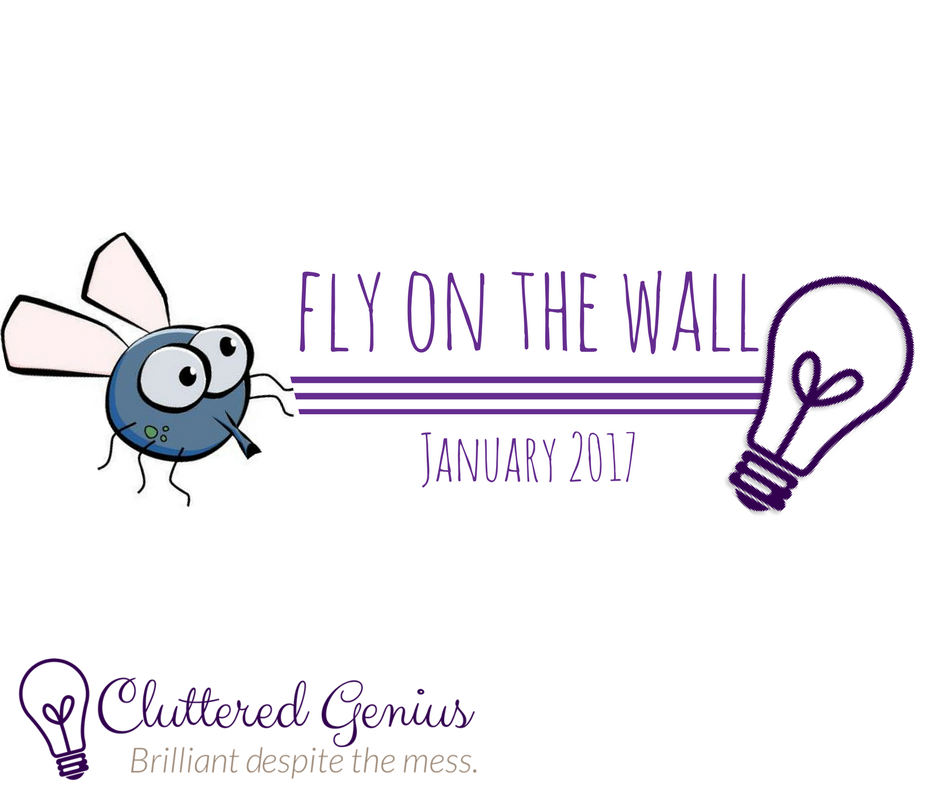 It’s been a while since I participated in a Fly on the Wall link up! But here ya go…a glimpse of my life in teeny snippets. Like a fly’s perspective. You get it. Now read.

My kidney is really pissing me off. Bad language, but it’s both literally and figuratively true. I’ve been dealing with pain since I had my 5th and 6th children (kidney stones, folks) back in September. This left kidney wouldn’t stop being swollen, so the doc had to do a little maneuvering in there to clean things up. So, I have a stent. And it hurts. And I hate it.

Today, Flash asked me if we should build a tractor with wooden tires to get through the (impending) snow. I told him that was sort of absolutely impossible, and he insisted. He just knows there’s a way to accomplish this goal. So, we texted Daddy.

It’s snowing! The kids flushed a cup full of ice cubes down the toilet and screamed, “Snow snow snow!” I kid you not, 15 minutes later and the sky was sprinkling the white stuff. They, for lack of a better phrase, FREAKED OUT. And felt completely responsible. Watching them high five each other? Priceless.

Math Man got home a little late and needed to take the mesh off of our pergola. So, against my will and better judgment, I bundled up the kids, and we went out in the fresh snow. This is Diva’s first “real” snow as she was too little last year to have any clue what was going on. Her first move? To eat it.

For the record, I don’t like being outside. That’s not quite true. I like being outside without kids. I like to listen to the sounds of birds and wind through trees and cars going by. But I struggle to enjoy the outdoors when I know I have to be responsible. Horrible, right? But it’s true. So when we have a snow day, while I know it’s incredibly joyous for the kids…I struggle. I have to bend and move and pick up and help and tromp and exert energy. I’d rather sit inside, watch it fall, and drink some hot chocolate. So when we went out today, and the kids started freaking out because snow touched their bare skin and they were cold? I just sort of thought to myself, “This is why. THIS.”

We’d been outside for maybe twenty minutes this morning. At least six (if not more — I don’t do the maths) inches were on the ground, and even I have to admit it was beautiful. According to Math Man, it wasn’t the “right kind” of snow to make a snowman, so running around and pulling the sled were the only logical options. Kid after kid lamented their frozen plight while I rolled my eyes. Diva fell face first into the snow and, although she was relatively positive about the experience, developed bright red cheeks that made us worry about eventual frostbite or chapping. We decided it was time to begin the short trek back to the house for lunch (and eventual naps). Just then, the wind began to pick up. Snow fell from tree limbs in large chunks. Math Man and I were surprised, but Flash and Diva were scared. Flash — all alone near the playhouse because he had chosen to go first for lunch — lost his mind. Afraid of why the snow was hitting him in the face like a blizzard, he just stood and cried. Diva was confused and reached for me. In that split second, I had to decide — go to the toddler or shield the baby? Sassy Pants was nearer to Flash, so I yelled, “Get him!” She sprung into action and grabbed him up. Math Man said, “Into the playhouse,” and like a firefighter saving victims from a burning house, she ran into the teeny playhouse and shoved them in. The Animal, ever the logical mind, asked what was happening. Math Man explained that he just needed to turn his back to the wind (“like when you’re at the beach and the waves are coming!”), and that suited his curious mind just fine. So when the next breeze began, I bent over Diva and Sassy Pants shielded Flash in the house. I turned to see the Animal bent over yelling, “I’m ok!” as he turned his back (and poked out his rear) just as his Daddy had told him. At that point, I grabbed Diva and ran with her to the little house (she now wanted to simply be with everyone else) and the Animal took the chance to join them. They huddled together to take a breather from the breath-stealing winds, and Math Man and I had to giggle. In a weird existential moment, I thought: could we handle a crisis? Would we know what to do if this was more than just wind? Would our kids know what to do to help one another if Math Man or I were incapacitated? And then I went back into my first-world problems as I fussed at them for whining about being cold.

They’ve called snow days already for Monday and Tuesday. There are good things about this (we’re all home together and can clean the house), and there are bad things about this (we might go bonkers, we only have so much food, Math Man’s wrestling schedule gets goofy). I’m aiming to look at all the positives. Christmas was filled with sickness and my pain from the stent, etc. Now that I’m feeling a bit better, we can enjoy our time together. And, it’s snowy out there. So it’s almost like a second Christmas without the mess of wrapping paper. And tomorrow is Sassy Pants’s birthday. This is the second year in a row that something has goofed up the family coming over to eat. Poor thing. At least she’ll get to sleep in!

When Math Man is home, I get to clean. With two folks here to watch the kiddos (or at least listen for screaming), more gets accomplished, and my anxiety levels are much lower. I’ve worked on my desk. I’ve worked on Diva’s and Flash’s closets. I’ve even caught up (mostly) on laundry. And because I’m a crazy multi-tasker, I slip in a few things on the computer while “working” on getting things cleaned up. Heehee.

School is back in session. Today was just the two littlest since there was a 2-hour delay and preschool doesn’t run with a delay (they’d only be there an hour). So, Flash and Diva and I ran errands and then visited Nana. When Diva went to sleep, Flash and I took advantage of our 30-minute alone-time and made rice crispy treats. Then, we cleaned out the fish bowl. Now, Dr. Dory Seuss has a nice, clean bowl.

Ever have one of those moments where you just know that what has happened wasn’t luck, wasn’t by chance, wasn’t a coincidence? A bloggy friend that I only know via blogging connected me with another friend who will quite literally make such a change in my life that I know this is bigger than sheer luck. I’ll keep it vague for now. I guess you’ll have to see if I talk any more about it in the next Fly on the Wall.

Come see what my other friends have been up to:

Baking in a Tornado