Patterns of Evidence (Review and Giveaway) 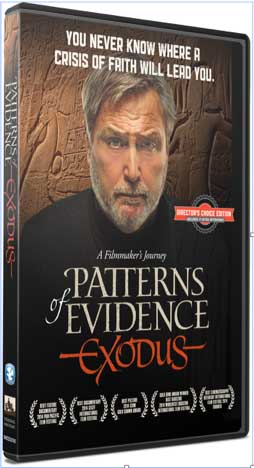 Be jealous: I have a Sunday School that is full of amazingly smart men and women. When we meet to discuss whatever topic for the week, discussion is fun but deep. Most recently, we have started a series of lessons that has us really digging in to the words of the Bible in a very historical way. We just finished up the book of Genesis and are moving on to Exodus. That’s why when I received Patterns of Evidence: Exodus to review, I was extremely excited. What a timely product to have in my hands!

The Patterns of Evidence DVD is the story of one filmmaker, Timothy Mahoney, who asked himself, “Is this foundational event [the Exodus] of the Bible really just a myth?”

As he begins the documentary, he discusses the modern skepticism that surrounds many stories in the Bible. Archaeologists and scientists alike have struggled to correlate what happened in the book of Exodus with what they have found in ruins and research.

As the story of Exodus is a foundational element of Judaism and thus Christianity, Mahoney’s question and search echoes the concerns that many believers have when they stop and try to connect history with Biblical account: Is it true? Can it be proven?

With stunning graphics and filmography, Patterns of Evidence held my attention and absolutely did not feel like the full 119 minutes that it is.

I can’t wait to share this with my Sunday School class to help deepen our own journey into our understanding of the Bible.

Like this video trailer? See what others are saying on the Patterns of Evidence site.

Enter to win your own copy of the Patterns of Evidence in the Rafflecopter below. This giveaway will end September 14, 2017.

Many thanks to Propeller Consulting, LLC for providing this prize for the giveaway.  Choice of winners and opinions are 100% my own and NOT influenced by monetary compensation.  I did receive a sample of the product in exchange for this review and post. Only one entrant per mailing address, per giveaway.  If you have won a prize from our sponsor Propeller /FlyBy Promotions in the last 30 days on the same blog, you are not eligible to win.  Or if you have won the same prize on another blog, you are not eligible to win it again.  Winner is subject to eligibility verification.

5 thoughts on “Patterns of Evidence (Review and Giveaway)”