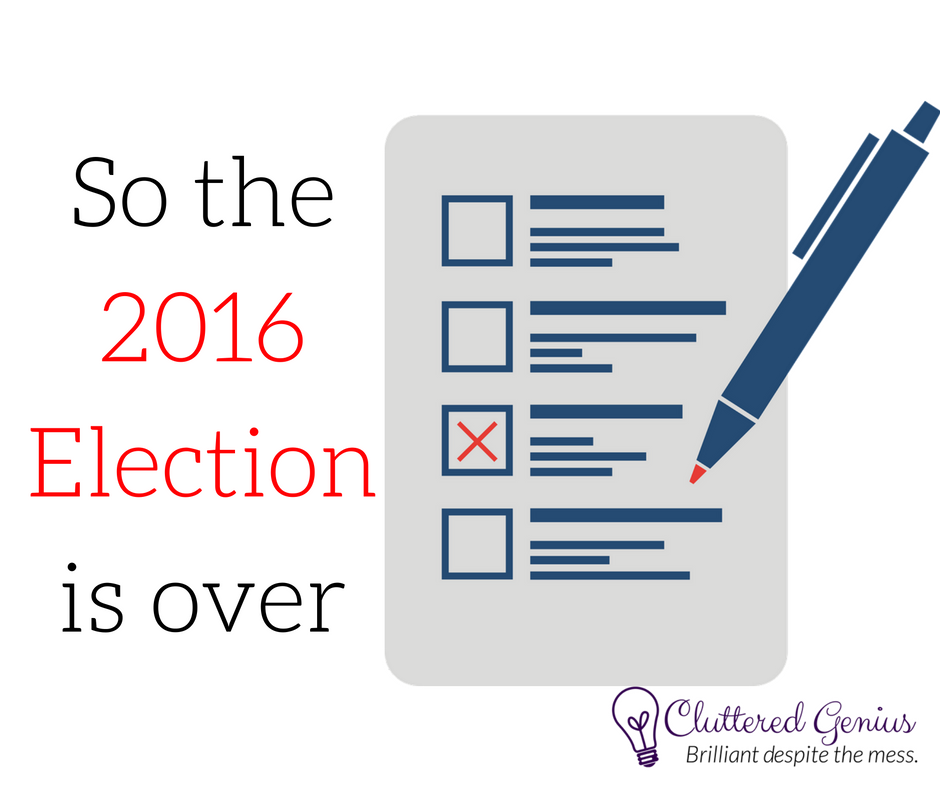 It’s over, guys. 2016’s political madness is — for all intents and purposes — finished. No more political ads. No more mailings. No more random texts. The 2016 election is over, and we have our new President-elect. And I’m sick to my stomach.

Politics? They aren’t my thing. Heck, history was a subject I thought was pointless (they’re all dead anyway) until I began teaching and needed to know about cultures, wars, and more in order to teach some of the literature I was offering to my students.

In past elections, my vote was based on how cute the candidate was or whether I liked his/her name. Or, in moments where I had no clue who was who? I voted for the woman on the ballot. I’m a little embarrassed to admit that this was my political strategy, but at 18 and then in my 20s? I was clueless. While I would have liked to believe that I had any idea what life was really like, looking back now I know that I knew very little in general.

I spent way more time during the 2016 election season conducting research than I had for any other election. Trying to parcel out the lies, the misdirections, the slander, the libel. Frustrated on Facebook because so many of my friends and family were posting links to articles that were just this side of untrue or were pure gossip. I was even guilty of posting at least one of the untrue articles myself.

The media did all of us a disservice with their inability (or unwillingness) to provide objective reports on what was happening (or not happening). My trust in most media outlets dropped much lower than they were to begin with.

I took it upon myself to fight through watching the debates so that I could hear the words straight from the horse’s mouths. I watched both the Presidential and Vice Presidential debates. I wanted to hear first-hand how the candidates answered — or for the most part didn’t answer — the questions. The behavior of all of the debate participants made the arguments and pettiness of my four children seem mild. But at least I saw it for myself. And at least I understood what people were talking about the next day or were making fun of on SNL.

Now, I’m watching as the outcome of the election process reverberates across the country and social media.

Some of my friends are dismayed. Afraid. Angry. Let down.

Others are rejoicing. Proud. Excited. Hopeful for change.

My own decision wasn’t made lightly. I researched and read and watched and listened, but it was beyond difficult to tell for sure if I’d made the best decision I could on election day. Right now, I’m still not sure. But here’s what I am sure of:

Many of my friends are literally scared, and what is being shared on Twitter and Facebook regarding hateful speech and messages and actions isn’t helping. Trump used language that frightened many of us, and his responses or lack of responses to some of what was and is happening hasn’t helped the matter.

But now there are people who are telling others that they need to just get over it. That they need to “pull up their panties” and deal with what has happened. Telling people to stop acting childish when they seriously had hopes and dreams crushed? When they feel absolutely fearful? Not okay. We are all allowed to have our emotions.

I don’t personally understand the full-on hurt that my friends are expressing. Why don’t I understand it? Because, from my view of the world, I’m not really threatened. My situation in life keeps me safe. Many of my friends don’t feel this way. And they are allowed to feel the way they feel and shouldn’t be chastised for it.

Yes, I know that had Hillary Clinton won, folks on her side would likely be saying similar things like, “Oh, get over it” or shouting that Trump deserved to lose. But does that mean that people need to gloat or post hateful memes about Clinton and her supporters after the fact? (Hint: the answer is NO.)

Like it or not, this is the result of the election. I’m not sure that any amount of gnashing teeth or rioting (seriously, people — rioting!?) or protests is going to change this fact. He won. It’s over. This is the reality that we now are living with. And on many levels, it’s horrifying. I realize that I likely have no clue how horrifying it may seem. But, other than hoping for a recount (which is unlikely) or signing a petition for the electoral college to do some things (which I also find unlikely), this coming January will usher in this man as our newly elected President.

My absolute and solemn prayer is that all of the things we saw him saying and doing were some sort of farce. That he was coached to speak a certain way so as to grab the media spotlight and get people who normally wouldn’t pay attention — on either side — to take notice. I pray with all my heart that he will be able to unify this country as he said he would during his acceptance speech. I pray that he will look into the camera sooner rather than later and implore his supporters to stop the hateful actions that we’re seeing. That he will morph into a Donald Trump we haven’t really seen and illustrate a level-headed demeanor.

This is where we are, my friends. Despite any thing we say or cry, Trump is our next President. So what can we do?

Realize not everyone is the extremist

To those assuming that the Trump voter is sexist or racist or uneducated…stop. While this could very well be the case, it isn’t necessarily true. The folks that I know that voted for Trump? They had reasons other than hating a certain race or hating women. They hoped for change. They feared the other candidate. They didn’t go to the polls lightly. I don’t know that anyone did.

And those assuming that the Clinton voter is anti-Christian or anti-life or something like that. Not everyone who voted for Clinton did so because they literally liked her. In fact, many that I know voted for her because they feared Trump and his behavior or simply because their general views of life aligned better with her platform.

It’s obvious that part of our struggle as a nation is the refusal to talk and listen to one another. To see past whatever frustration we have with the person in front of us and really hear what he has to say. To recognize that, once we strip away some of the bravado and big talk, we’re all very much the same with goals and desires to live happily and full of love.

I don’t try to say that I have the answers. Shoot, if I did, I guess I’d run for president. But I don’t, and I would wager that the most of you don’t either. What I do have is a love for my country, my family and my friends. I have a faith in the One who I believe will work it all out. And it’s my hope that everyone else — regardless of the “side” they’ve taken — will find a way to talk and listen in an effort to understand one another and move above, beyond, and forward.