Simple Ideas for Sprucing Things Up 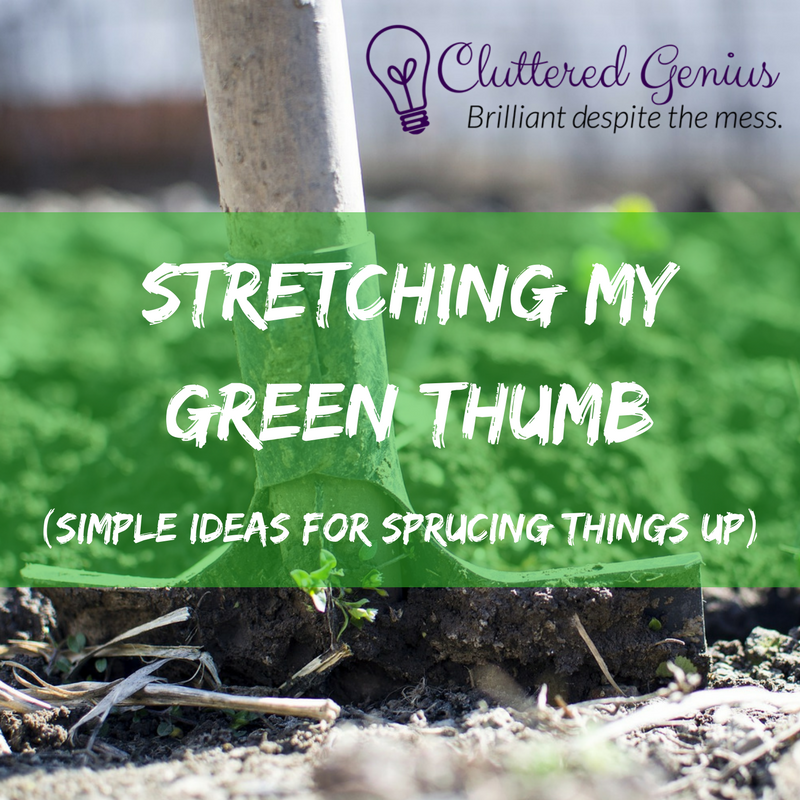 It’s pretty well-known among my friends that I do not have a particularly green thumb. Generally, I kill all outdoor plants. I have two potted trees that were labeled as “easy care,” and I’ve just about murdered them (I’m trying to fix my mistakes). We’ve recently moved into a new place, so we have new gardens where we can try our hands (or green thumbs) at sprucing things up.

The first step was to remove the old stuff in the garden. After a long winter and with the move taking up most of our time, this little garden continued to grow weeds and grass until it appeared to simply be one big mess. 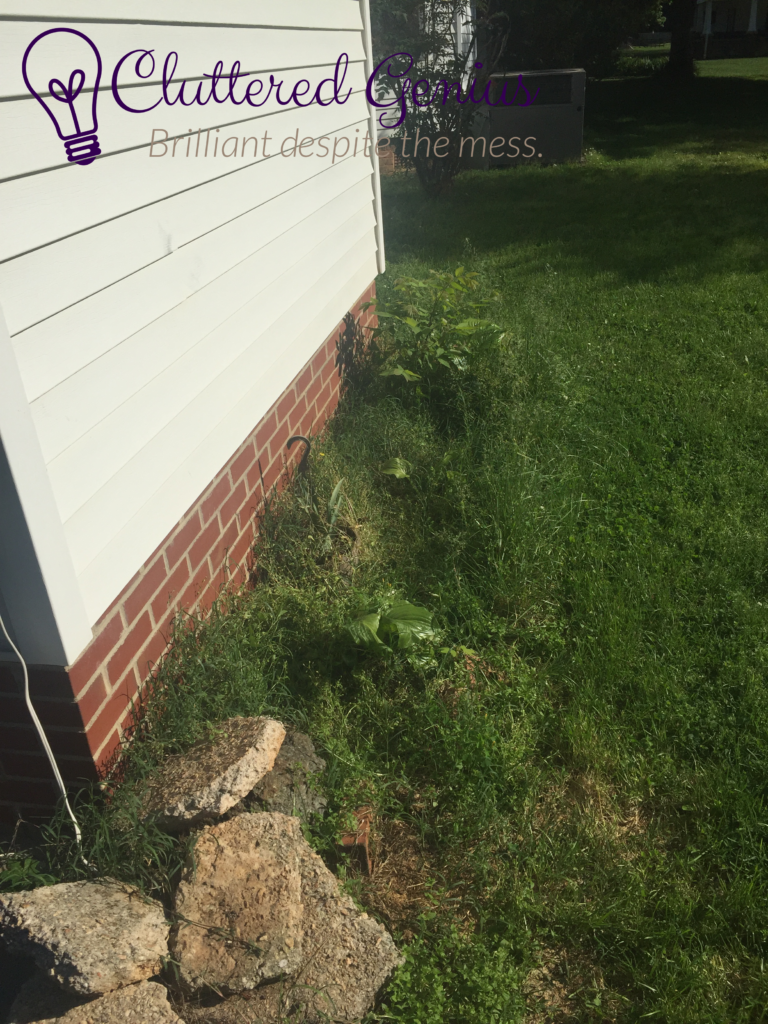 I had to dig in and get those weeds out. My first attempt was with my bare hands. This didn’t last long before Math Man appeared with a rake-y thing and a shovel. Flash (4) offered his cheers of support as I pushed and scraped and raked and huffed and puffed. It didn’t help that I’d chosen the hottest day of 2017 to work in the direct sunlight.

There’s a garden on the side of the house that is PERFECT for growing seeds and herbs with the kids. It needed work first. Have I mentioned how much I despise being outdoors? And sweating? And dirt? The sacrifices I make for my kids. ❤️

Once we broke up the soil and got to actual dirt, I had to remove the brick that had been used as a border. I was amazed by how deep they’d gone into the ground — or maybe how much the grass had grown up around them. At this point, the bricks are staying there. Some are covering a wire that is part of our Invisible Fence. Others are just there because I can’t decide what I want to do with them. 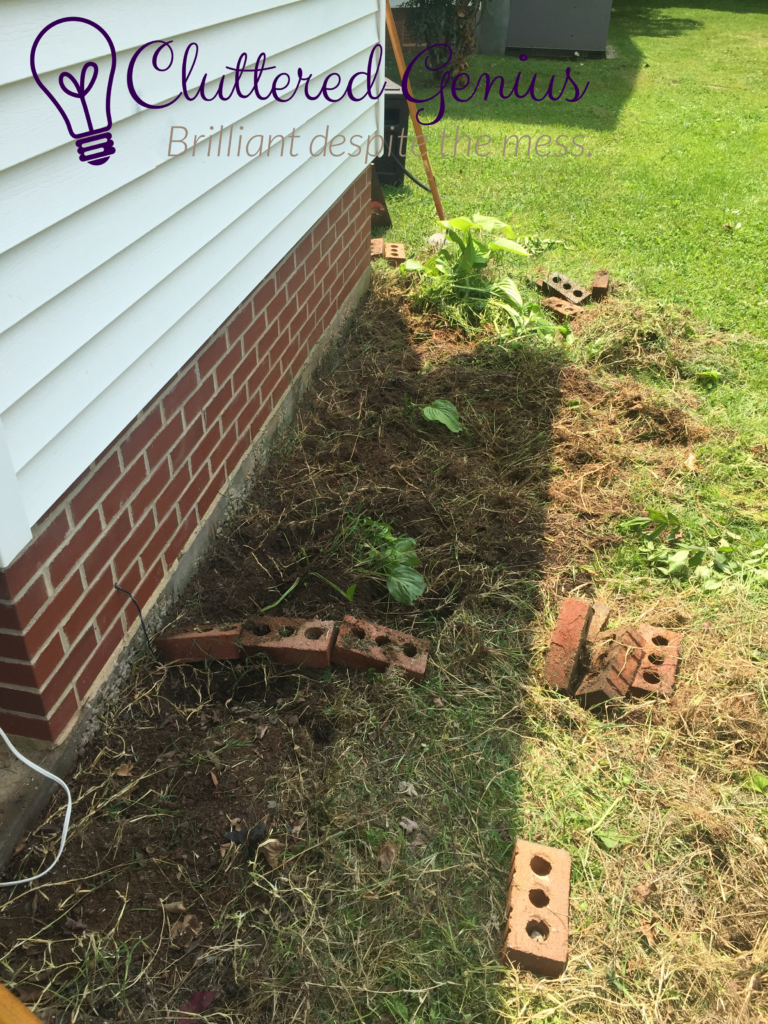 We had to wait until the next weekend to finish up (it was hot the first day, and kids needed food and stuff). Of course, the next weekend ended up being back to the chilly 50s and rainy. But this rain helped make the soil soft so we could pull the remainder of grass that seemed to have rooted many feet down into the ground.

Once that was cleaned up, it was time to plant.

The Animal (almost 6!) had brought home a seed from school. It was wrapped in a paper towel, and I wasn’t sure it was going to actually grow at all. We’d kept it in the kitchen for a few weeks. Alas, it had actually begun to grow, and leaves had appeared. He and I dug a hole (with a sandbox shovel!), and planted what we had discovered was a pumpkin seed! 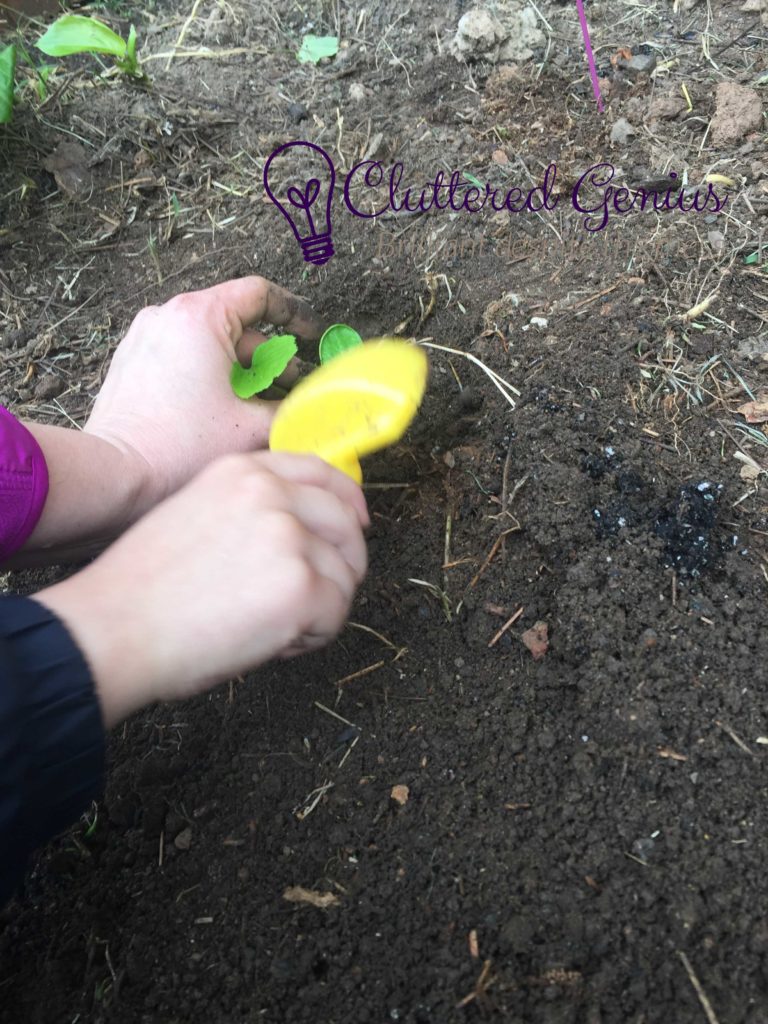 Flash brought home sunflower seeds. They had been living in our window sill for weeks. I was quite a bit shocked that they were still green! He, too, dug his seeds’ hole with a sandbox shovel, and then he helped me smooth everything out. 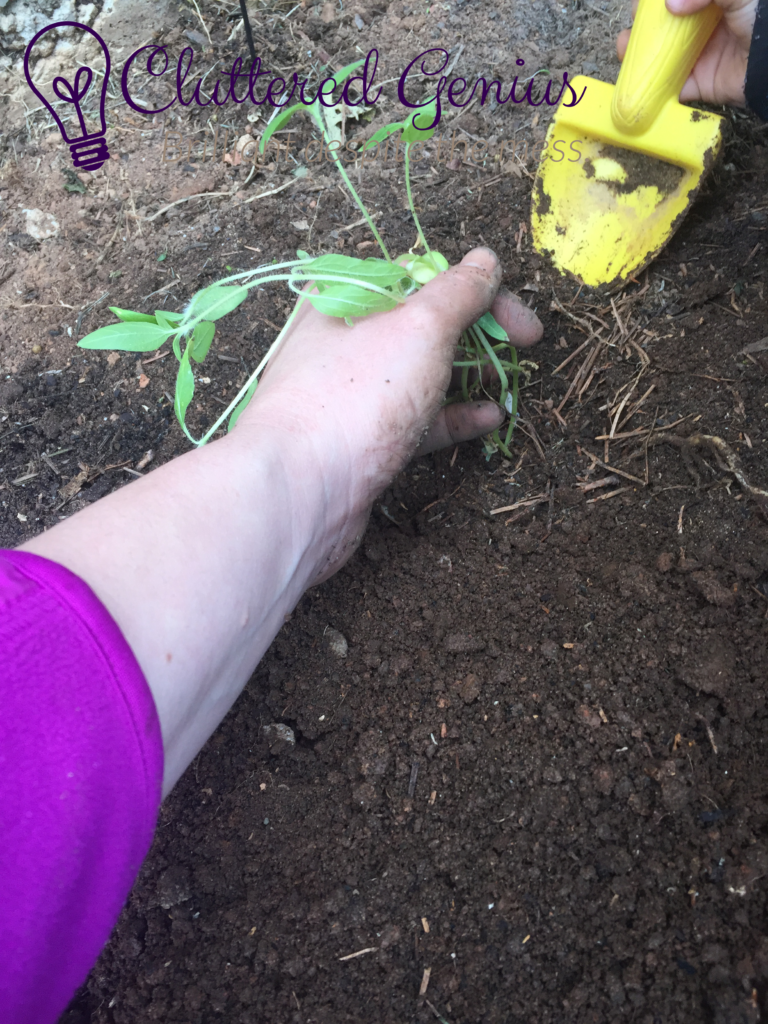 Flash and Diva (2) and I had gone to the store to buy decorations. Flash picked out an owl, and Diva picked out a flower. We added those to the garden, included the stick Flash’s teachers had put in his pot when he brought his seeds home. 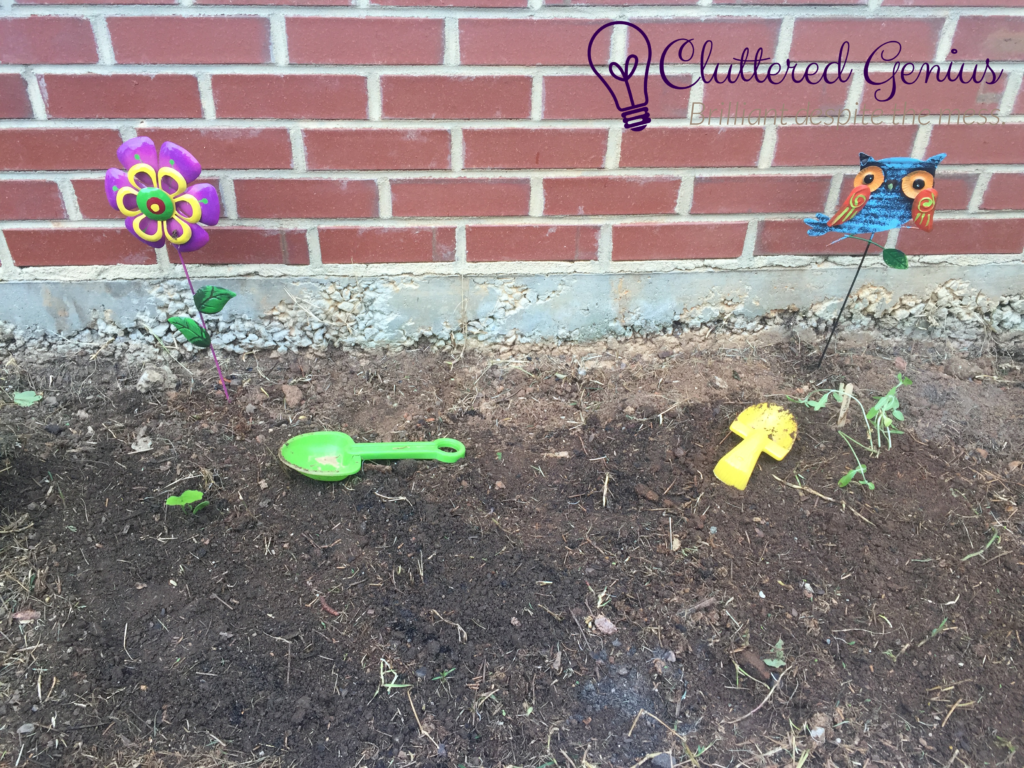 While there is still plenty of work to be done, the kids learned about cleaning and planting a garden, and now we have a fun project to watch as spring turns to summer. 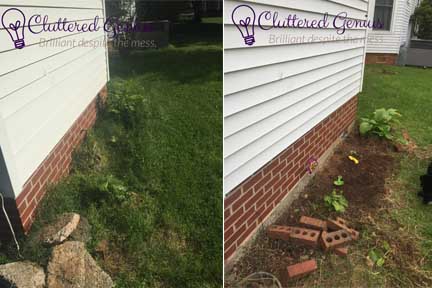 Inside, I wanted to try out a succulent arrangement. Everyone keeps showing off their cute displays, so I went to Lowe’s and bought a few succulents (I also bought some for my sister-in-law). Then, we went to the craft store and picked up moss and containers. I bought my SIL the white container to coordinate with her soon-to-be decor in one of her rooms. I bought myself an aqua (my new obsession) container. 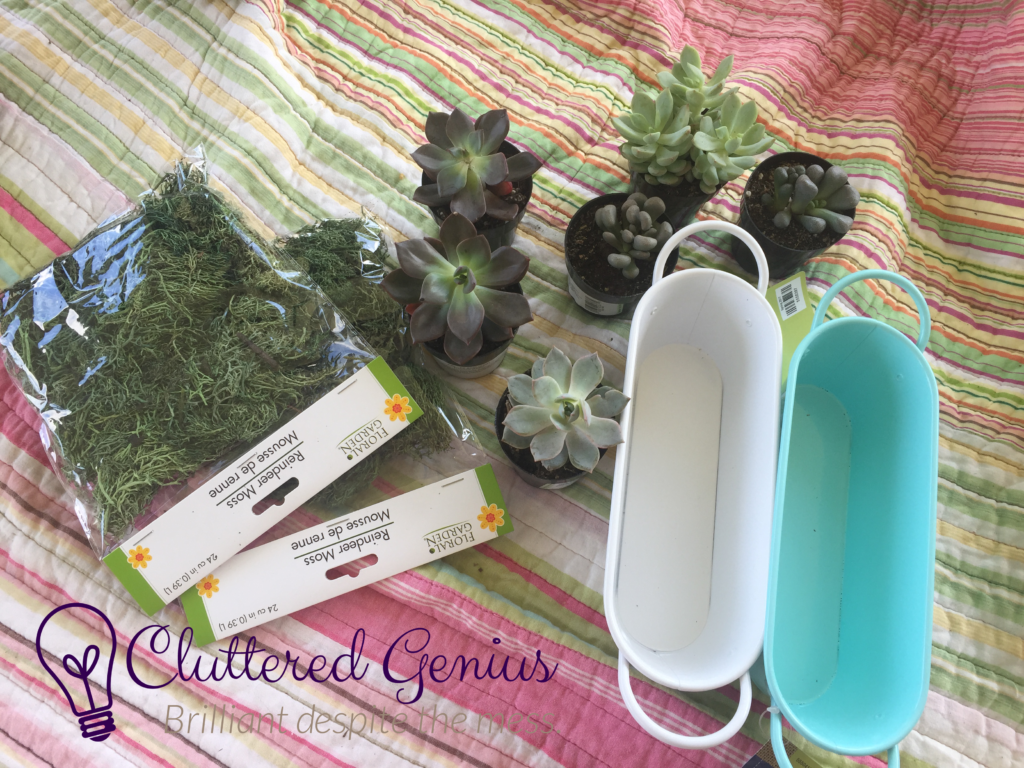 I was really proud of what I created here, and Flash and Diva were super pumped to help me with the moss. I did keep each succulent in its own pot for identification and ease of planting. 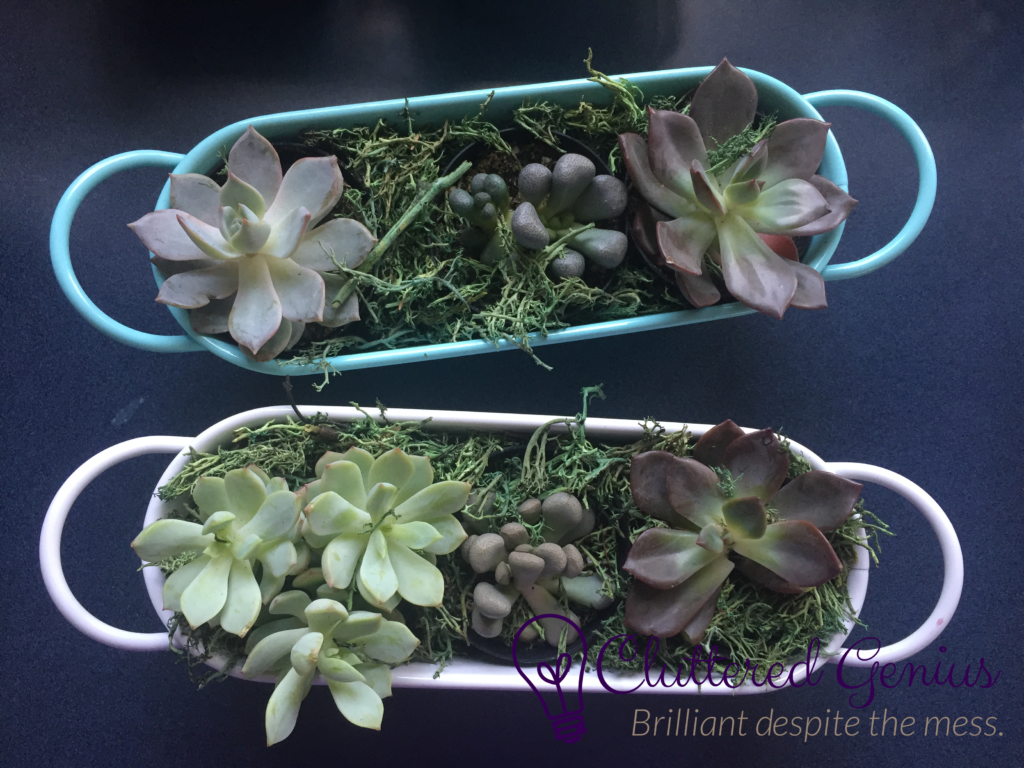 This month, our Blog with Friends theme is Outdoor Life. Check out what my bloggy friends have up their sleeves! 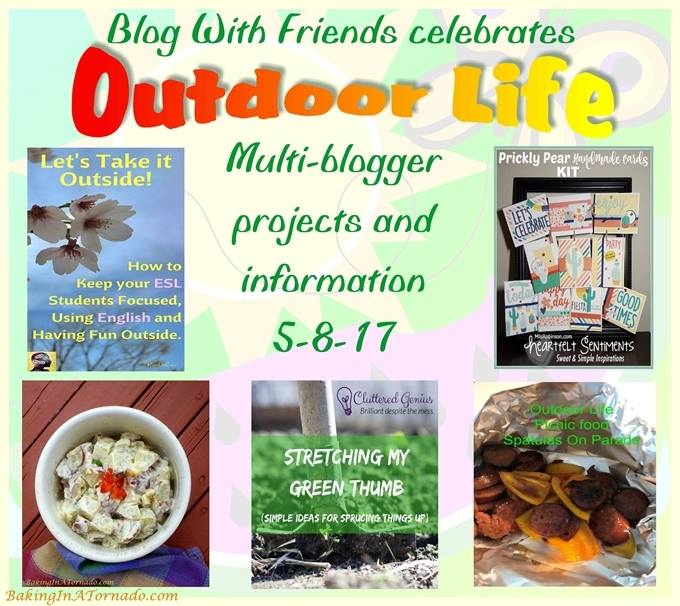 Baking in a Tornado has a recipe for Apple Cider Chive Potato Salad.

Learn in English has suggestions for taking the classroom outdoors with your English Language Learners.

My Heartfelt Sentiments has handmade cards in the Prickly Pear theme.

5 thoughts on “Simple Ideas for Sprucing Things Up”