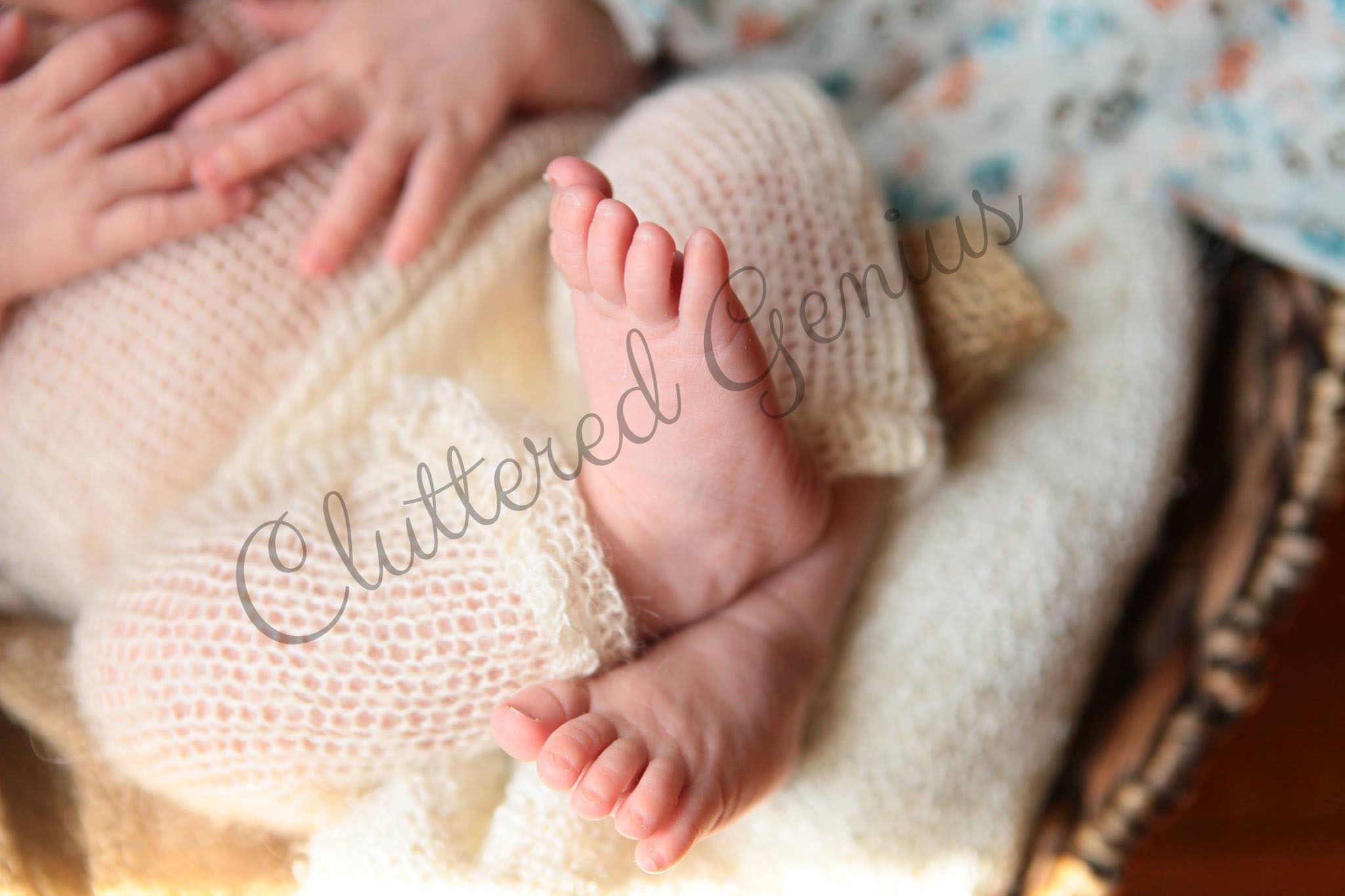 I have been meaning to write this post for over two weeks – go figure since Baby Diva is over 2 weeks old. But finding time to write between 4 kids, my jobs, and my lack of sleep (helloooo coffee) has been really hard.

Today, I magically have found the time. So, here – in all its glory – is the story of our sweet Baby Diva’s arrival.

Monday before my due date (the 27th), I had a regular 39 week checkup. I was praying the doctor would find that I was ready to have this baby. I was prepared to beg for an induction or membrane sweep. I didn’t have to pray hard.

The week before, the Nurse Practitioner told me I was only 1 cm (if that), and I was extremely saddened. I don’t know why I was trying to hurry this baby along, but I do know that I was in severe pain. Sleeping was hard. Walking was hard. Doing just about anything seemed to suck every bit of life out of me.

So when Dr. M told me at my 39th week appointment that I was actually 4 cm, -2 station, 50% effaced and “ready to blow,” I was a little surprised. Right there in her office, I was having contractions every 3 minutes or so. She told me to go home and pack my bags – and she gave me some assistance with a sweep.

Heading home, contractions weren’t so regular but when they happened, they were wicked. My nerves started to get the best of me. Why is it that once we know something is inevitable, we get even more nervous than we were before?

Funny thing is: I had two events to get through. I was running a Twitter party for Simply Aroma as well as a Facebook party for a customer. So I kept asking Baby Diva to at least wait until about 9 pm to really kick things into high gear. She did. In fact, she decided to make things stop. Where I was having contractions at 6 minutes apart, I was suddenly not having them anymore.

That didn’t keep Aaron and me from getting our stuff together and making plans and lists for my mother who would watch the kids. We fully expected to walk out in the  middle of the night to have this baby.

Instead, we both tossed and turned all night.

When we woke at regular time for work and our routine, I was shocked. As soon as he left the house, I got the boys ready and prepared myself for Flash’s well baby 2nd birthday doctor’s visit. The pediatrician walked in as I was on the phone with my own nurse asking if I should come on in. Contractions were back to every 6 minutes.

The nurse stalled a few times in helping me make the decision. Then, she finally said, “You know what? It’s your 4th. Come in.” After all, Dr. M had told me that if I came into the hospital, no one would let me leave.

I calmly texted Aaron and told him to come home. I called my mom and told her things were for real. I got home with Flash (after stopping in the pharmacy for his antibiotics) and had a hot dog. Nutritious, huh?

Aaron got home around 11 and we were ready to leave. Despite one moment when we had to turn around because I forgot my insurance card (oops), we were at the hospital by noon and checking in at the ER. I’m pretty sure the ER desk staff thought I was crazy. I was having contractions but nothing so serious that I couldn’t breathe or talk. In fact, I was so calm that I’m pretty sure they were thinking, “This chic is faking it.” But, contractions were coming every 3 minutes or so.

When we reached the observation area to make sure that I was really in labor, contractions slowed way down. We were on the monitor and saw that they were about 11 to 14 minutes apart. They were getting more intense as time went by, but they weren’t “regular.” I was still only 4 cm, and I was certain the nurse was going to tell me to go home.

Luckily, Dr. M was at home literally monitoring me on her computer — kudos to modern technology — and telling the nurse to keep watching me. They wanted to see if Baby Diva’s heartbeat was reactive.

Ok, 4 pregnancies in 10 years, and I had no idea what this meant. We’d never had this conversation about any of the rest of the kids. I texted my friend, Candace, who is a labor and delivery nurse, to find out what in the heck the nurse was talking about. Candace laid it out in layman’s terms, and I started to understand: they wanted to be sure that Baby Diva could handle the stress of birth.

Her heartbeat was non-reactive. That’s a scary phrase when you don’t fully understand the phenomenon. So, Dr. M told the nurse to go ahead and do some buzzing. The funny little machine that she used on my belly was supposed to wake Baby Diva up. True to her moniker, she didn’t wake. I got water. I got crackers. I even got some sort of Mountain Dew-like drink.

Finally, I was told they were going to hook me up to some fluids via the IV. And just as the nurse was ready to do it, Dr. M called and said, “Wait! Baby’s heartbeat is reactive.”

Instead of going ahead with fluids, the nurses hooked me to an IV port just in case. They were sending Aaron and me in the hallways to walk — for an hour and a half!

My hips were angry. My back was angry. The contractions started again. It wasn’t until almost at the end of the 1.5 hours that my muscles in my stomach were exceptionally tired. I didn’t want to walk anymore. So, we went back to the nurses and told them just that (plus, I was sweating and no longer anywhere near attractive).

They checked me again. Not much had changed. Now, I was closer to 5 cm but still not much. Contractions were harder but not much closer. I was, again, certain they were going to send me home.

True to her word, Dr. M wouldn’t let me go home. Instead, she told the nurse, “Forget this: I’m coming up there to break her water.”

That was at about 5:30 pm. We started contacting family, getting me ready to move to the labor and delivery room, and getting the IVs going.

In a whirlwind of activity, the antibiotics they had to give me before she was born burned the ever-living junk out of my arm. I thought, for a moment, that I might just need to rip my arm off from the elbow down. The nurse had pity on me and turned the antibiotics off for a bit. She flushed my arm with more fluids, and then started the drip of antibiotics on the slowest drip she could choose.

Then it was time for the epidural. My water still wasn’t broken although Dr. M had arrived to see me (it was about 7 pm now). For whatever reason, getting the epidural hurt more than anything. I was also shivering and shaking from excitement and anticipation. Aaron let me squeeze his hands while the doctor put the epidural line in, but it didn’t really help. I asked Aaron, “Why does it hurt so much this time?” (meaning every bit of the process), and his smart aleck response was, “Probably because you’re old.” The nurses loved my reaction (which was to laugh in the midst of all of my pain).

The epidural was in, and it was time to break my water. It took the medication a little bit of time to kick in, so I had the pleasure of feeling the intense contractions. Not too much longer, and my feeling was gone. I had some control over my legs, but really only my right leg. And that’s when things became funny: my left leg fell — hard — on the bed. I didn’t realize what it was, though. I only heard the loud thunk of it hitting. I asked the nurses what is was, and they said, “Your leg!”

A little while later, as Dr. M was getting things set up, my left leg fell again. That’s when Aaron was given the job of holding it up. Glamorous, I know.

The nurses and doctor said I was ready to go. But, my mom hadn’t arrived, and I was determined for her to be in the room when this baby was born. Baby Diva had waited until this late (it was a little after 8 pm) to arrive, so it made it possible for Mom to get there. But, I was the genius who requested she pick up some dinner for me (remember – I’d only had that hot dog!), so Mom was running later than she should have been.

We just sat there – the nurses, the pit crew as Aaron likes to call the people who do the cleaning, etc., Dr. M, Aaron and me. We just waited for my mom to show up while we chatted. Dr. M made me promise not to sneeze. Baby Diva was right there and ready.

Mom walked in, and we hurried her to Aaron’s side. Dr. M told me that with the next contraction, I’d start pushing. So, that’s exactly what we did. In less than 1 push, Baby Diva arrived at 8:53. 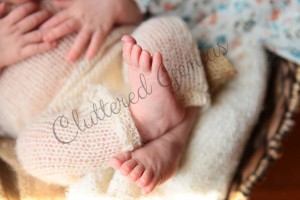 They laid her on my stomach, and I couldn’t believe she was here. Immediately, we decided she looked like her oldest brother. It was uncanny how similar they looked!

They weighed her, and she came in at 9 lbs 6 oz. She was perfect – and still is!

If you’ve made it this far, I’m impressed! Long story that could have been a lot longer – – there were so many great things that happened that day, but the best was finally getting Baby Diva in my arms and hearing her sweet sighs as she breathed.