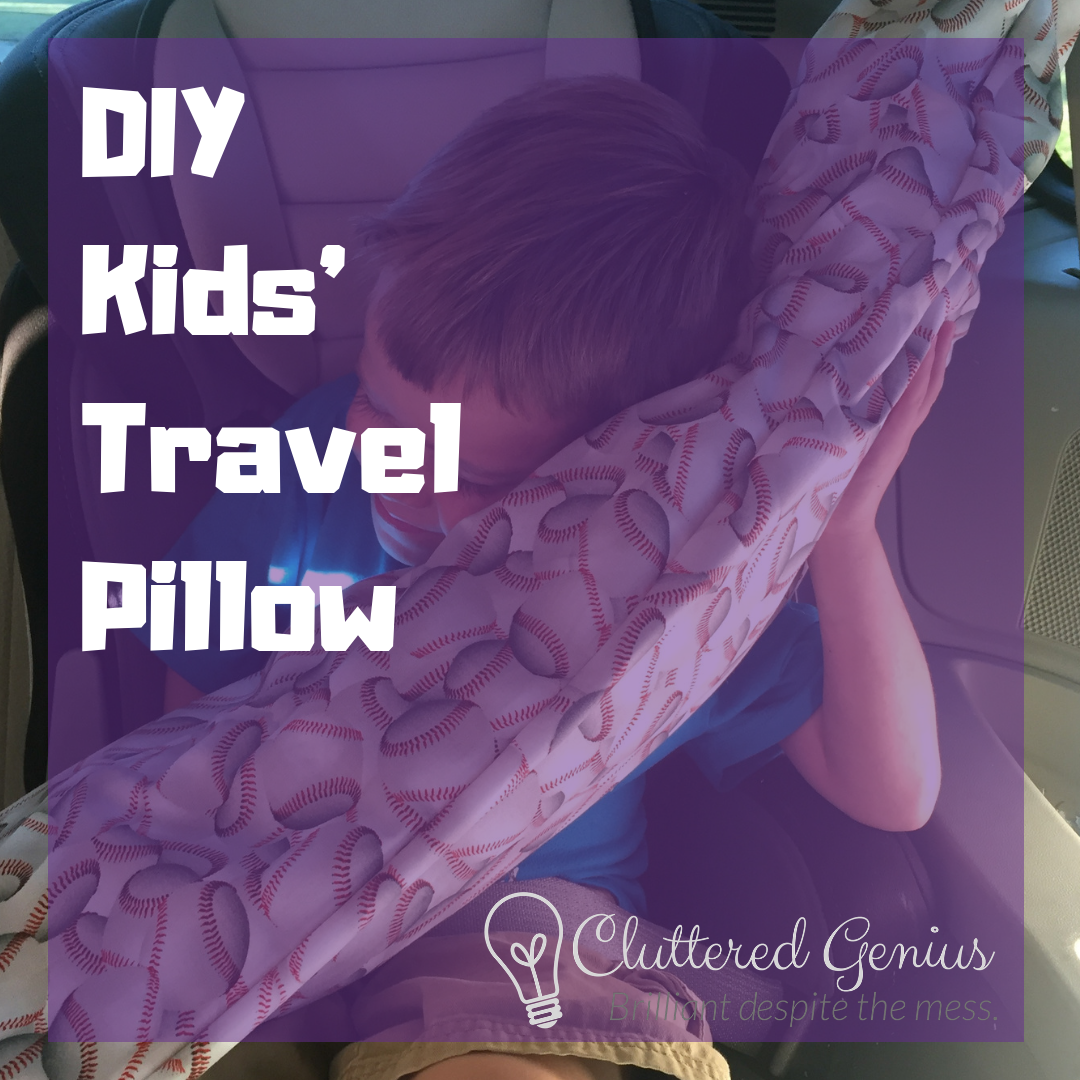 As the holidays approach, there will be several opportunities for traveling to family gatherings. Our kids are getting older and easier to travel with, but that doesn’t mean that they don’t get sleepy in the car sometimes. Flash, our 5 year old, is the most likely to fall asleep. He actually sleeps on the way to karate most days because being in Kindergarten is a hard job. I tried to get the boys a travel pillow to attach to their seatbelts, but they were actually way too small and didn’t support their heads at all. Thus, I created a DIY Kids’ Travel Pillow, and I’m both proud of and laughing at myself.

The first thing I did was find an old pillow. We have several that my mother-in-law gave me, and I had intended to recover them with various items. A t-shirt. A fun patterned fabric. When I decided to make a kids’ travel pillow, it was a no-brainer to grab one of the pillows she gave me.

Because Flash’s head always droops and looks horribly uncomfortable, I chose the most dense of the pillows. With great joy, I cut right through the center. Flash was aghast at my choice of destruction. He was certain I was messing up all the things! 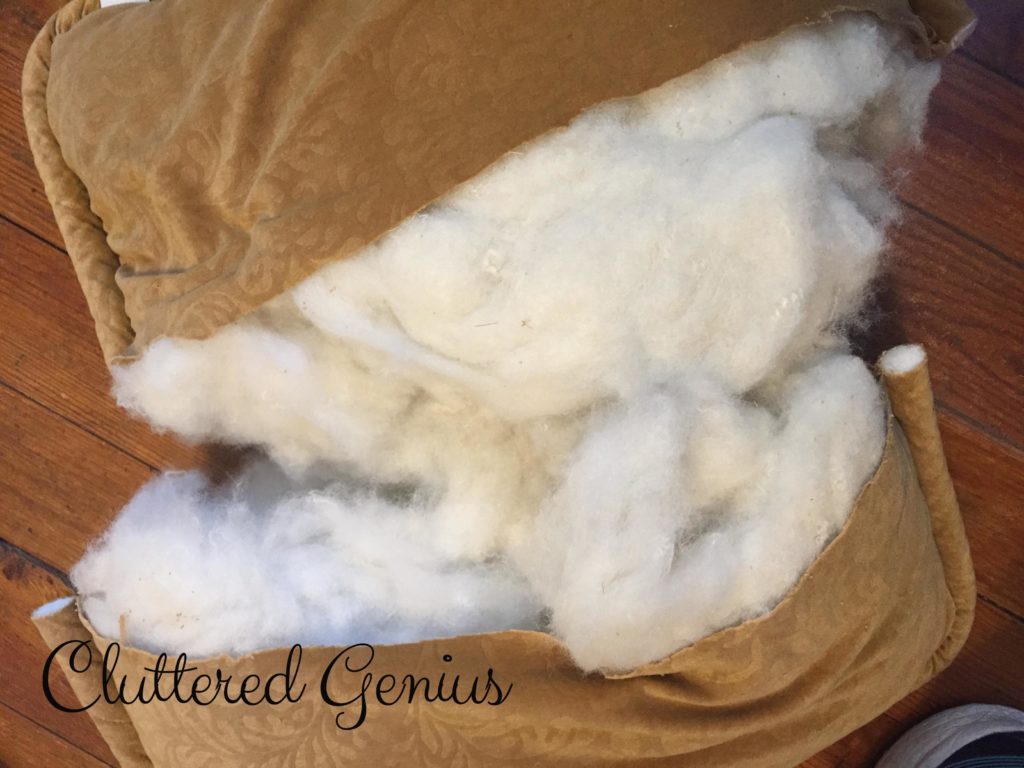 Next, I grabbed my teeny sewing machine. This is where things get funny. Lydia does not sew except for the occasional patch or button. I know a bit about the sewing machine because my mom used hers so much when I was growing up. It took me a few to get mine working correctly and actually sewing the material.

First thing I did was to piece the two pieces of the pillow together to make one long pillow. I had taken the stuffing out, so I just sewed the ends together. Then, I sewed most of the way up and left a hole big enough to stuff the innards later. 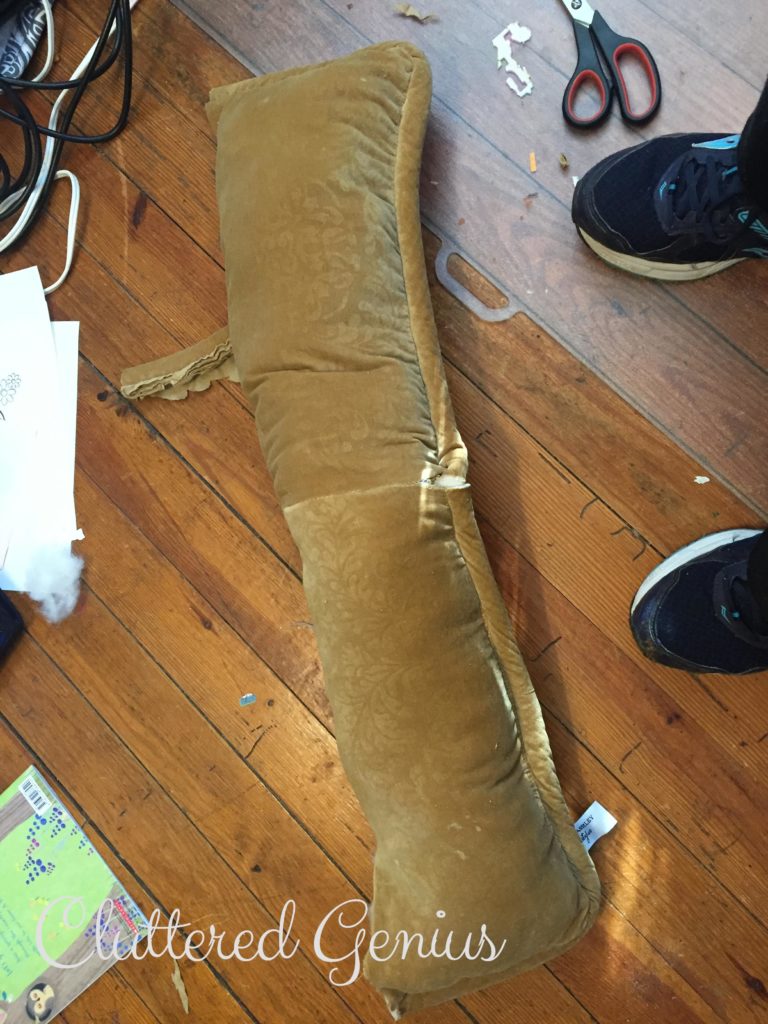 The hilarious part of it was how bad my sewing was. Thank goodness that no one would actually see this part since I had a smart idea to make a cover in case it needed to be washed.

With the pillow put together and the stuffing added (which was super fun for Flash), I had to hand-stitch that hole. Now, here’s where I thought I was going to have magical hands and make it look so nice. I mean, I’ve watched enough 5 Minute Craft videos to know that there’s a way to stitch and then hide that stitch.

Wrong. It looks horrible. But again, no one is going to really see it since I decided on the genius idea of creating a pillow case. 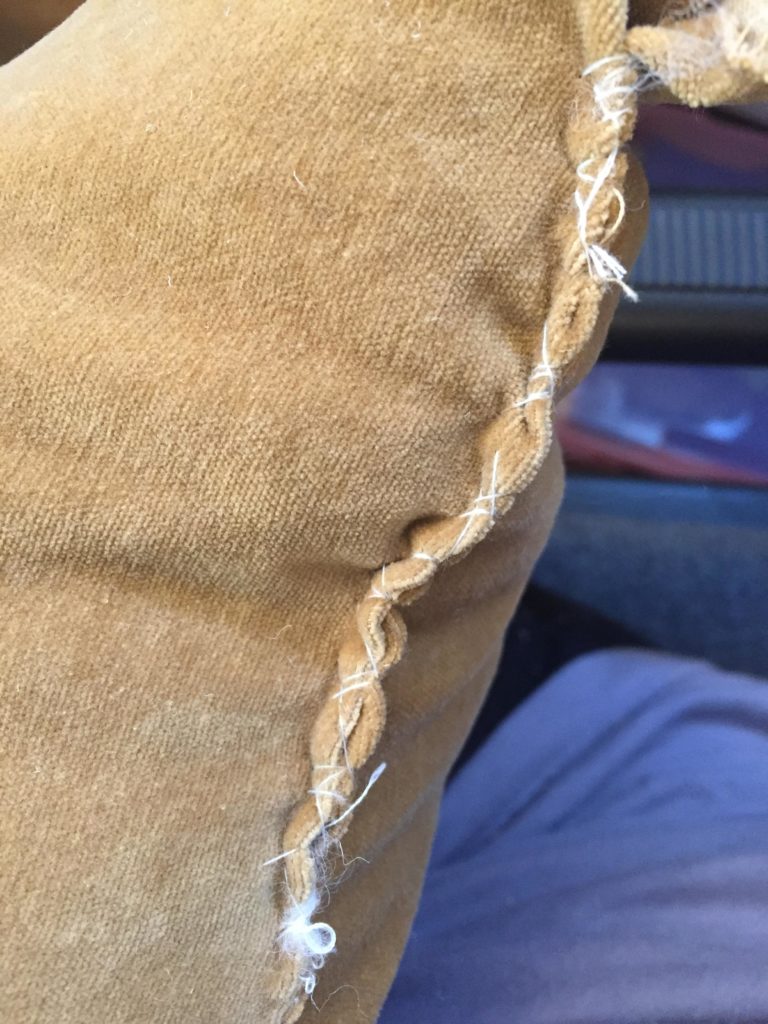 In my craft goodies, I’ve held on to a piece of material with baseballs on it. For a while, it covered a bulletin board when I was in my face-to-face classroom. I haven’t been in a live classroom in almost 8 years. So, it’s sat in that closet for a while.

This was the perfect solution for its use, and I was pumped to discover that there was actually the perfect amount for making a pillow case.

I used the ol’ Pinterest to find a how-to on making a simple pillow case and just knew I had this under control. I even decided to fold the one end down and make a nice seamed end. 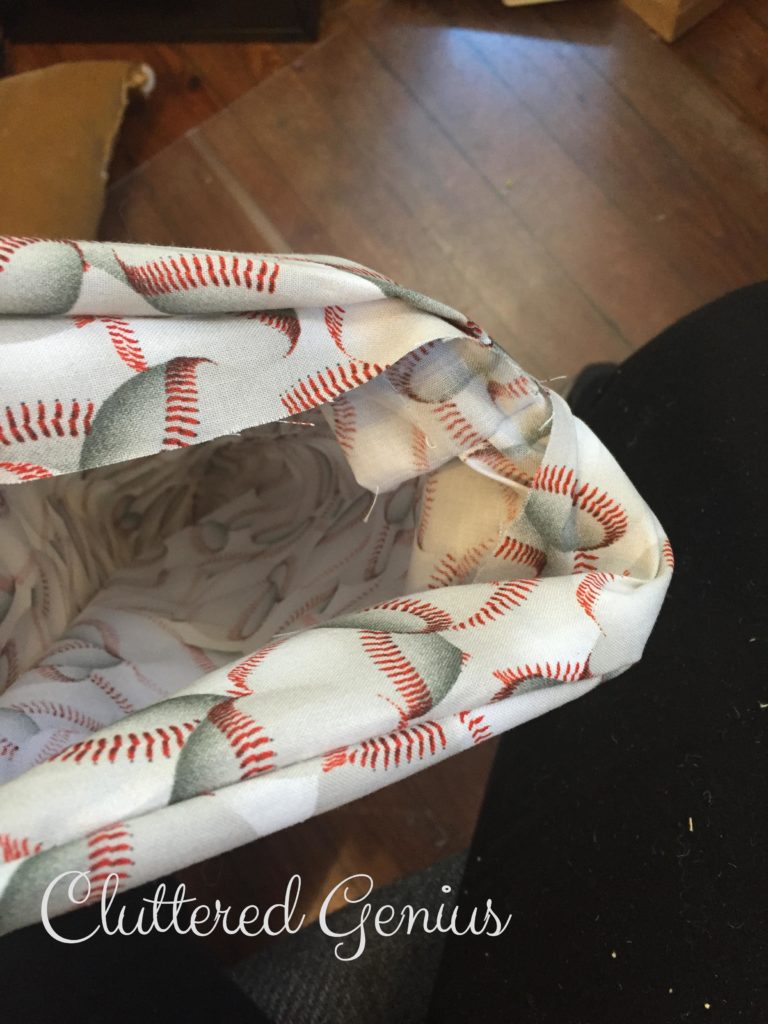 Oops. I turned that end the wrong way, so it’s all goofy on the end. I’m still laughing at how bad it is.

Since I’m not selling this pillow or pillow case, and it’s only going to be used so my little man has a comfortable car-sleeping experience, we’ll just laugh every time we look at it and go about our business.

The final final final step was to take the pillow to the car and see if it would work well for Flash. It does! The only piece left to do is to add either some velcro or ribbon to tie it to his seatbelt. 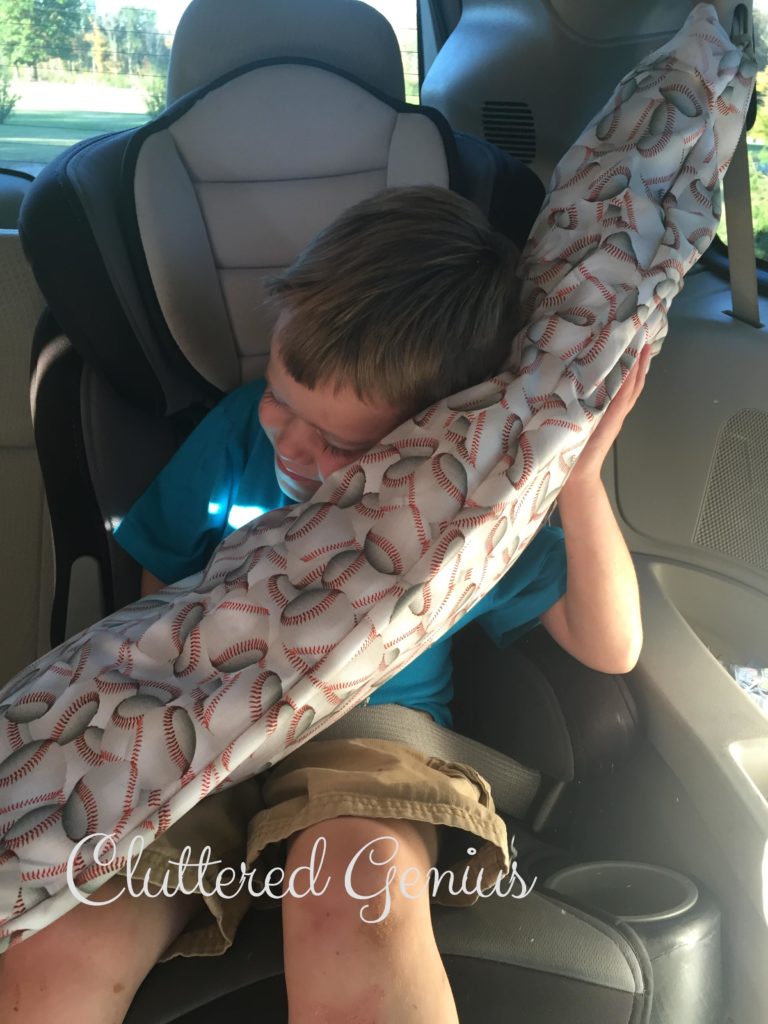 I’m even thinking that I’m going to add a piece of elastic at the top to somehow fashion it to his carseat. There’s a small spot where the seat belt can tuck in. This would be a great solution to the fact that anything he uses often falls down.

Flash is excited to have “his” pillow now, and he’s already used it a couple of times. I probably should have asked for a bit of help, but for a first time trying to do something like this, I’m proud. It will be extremely helpful to have this car pillow as we travel over the holidays! 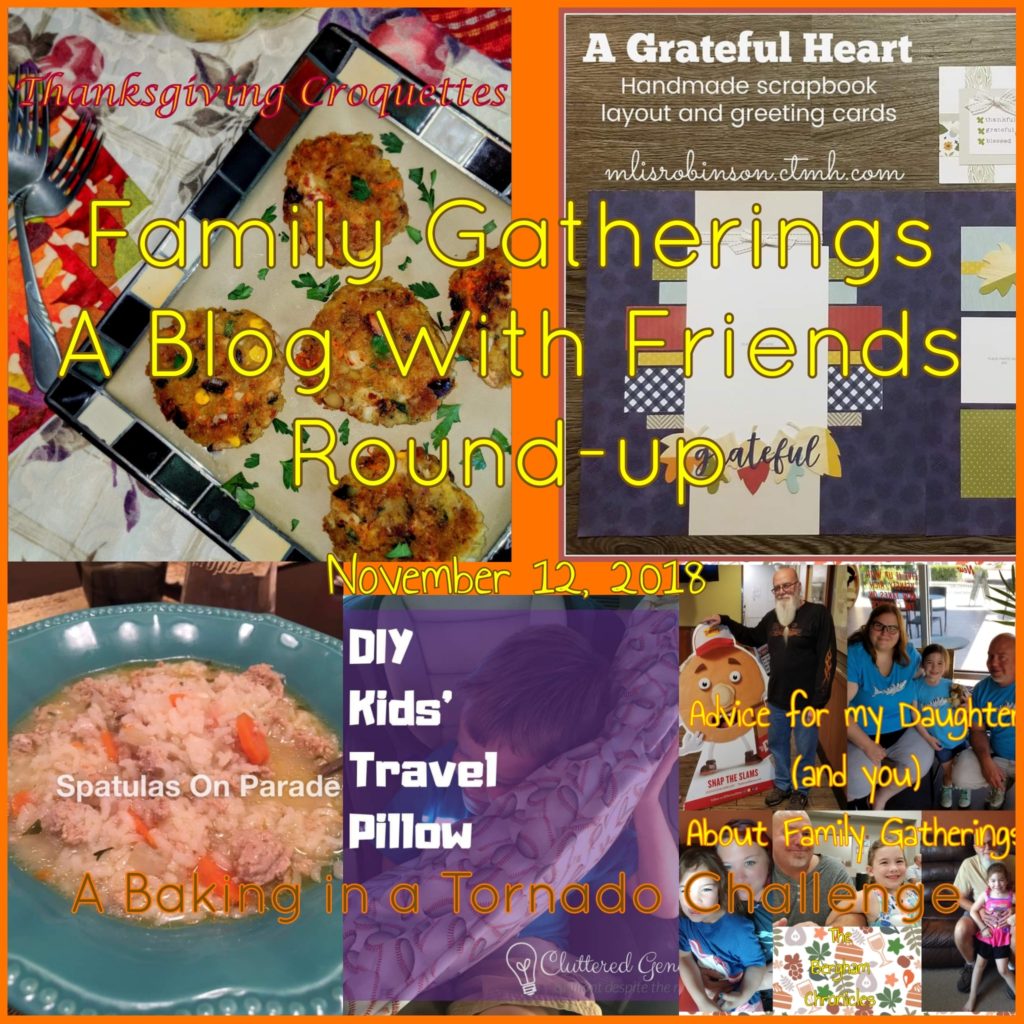 The theme for this month’s Blog with Friends is Family Gathering. Go check out my friends’ posts!

Thanksgiving Croquettes from Baking in a Tornado

Turkey Soup from Spatulas on Parade