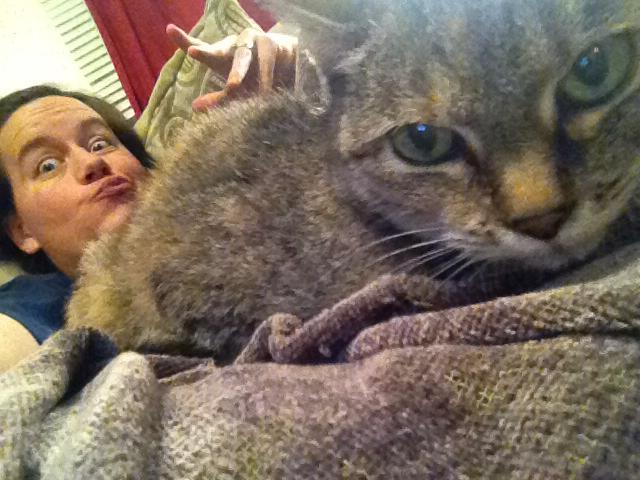 Friday, I was put in my place. You know how I’ve continuously harped on how much I dislike our cat? I even made up a hashtag: #mycatwontdie. Well, I’ve had to eat my words.

We made the difficult – but necessary – decision to send Ethel (the cat) to Rainbow Bridge. Her vomiting (daily) had increased, and it was just time. We’d already talked about the fact that it was going to be even harder to deal with all of the random and varied messes she made once Diva arrived in May. In fact, we came close to taking her in last weekend. But I convinced Aaron otherwise — she was throwing up, yes, but it wasn’t much more than normal. We should wait. He wasn’t ready (she’s really his), and it was obvious.

Then, this week, she started. In one day, she threw up 4 times — and two of those were weird water bubble-looking piles that told me she was retching for really no reason. Couple that with the weird raspy cough I heard, and I knew she was giving us signs. For once, I appreciated Ethel. She was giving us a clear indication that we weren’t making the wrong decision.

I made the call. I took her in. I sat with her. I didn’t really want to sit with her in her final moments. She didn’t particularly like me; but I knew that if I left her alone with strangers, she’d most likely be even more frightened. So, I stayed. And I held her. And I soothed her as best as I could.

It was quick and clearly painless. And then she was gone.

I’ve never – in my entire life – witnessed the life literally leave a living creature’s body. Last night — and some of today — I couldn’t get that vision out of my mind.

The doctor was kind enough to assure me the she probably had stomach cancer. At her age (she was 14) and with the amount of vomiting she was doing, it was likely she’d developed something we would either not be able to treat or would have to spend tons of money working to help.

Ethel didn’t go without making sure we remembered her, though. She fought Aaron as he put her in the cat carrier. She scratched my arm while I held her waiting for the doctor. The land where Aaron buried her was riddled with difficult-to-dig-through roots and vines.

Just wouldn’t be Ethel if the process didn’t have a few persnickity problems.

Miss Sassy Pants has made her a stone for her grave, and we have slowly removed her cat items from the house.

You all know that I had a lot of dislike for her — but she was still a part of our family. She was like the old, crotchety aunt that always had something negative to say or always gave us the stink eye. But, I loved her. I really did.