When Jesus was a Green-Eyed Brunette (Giveaway) 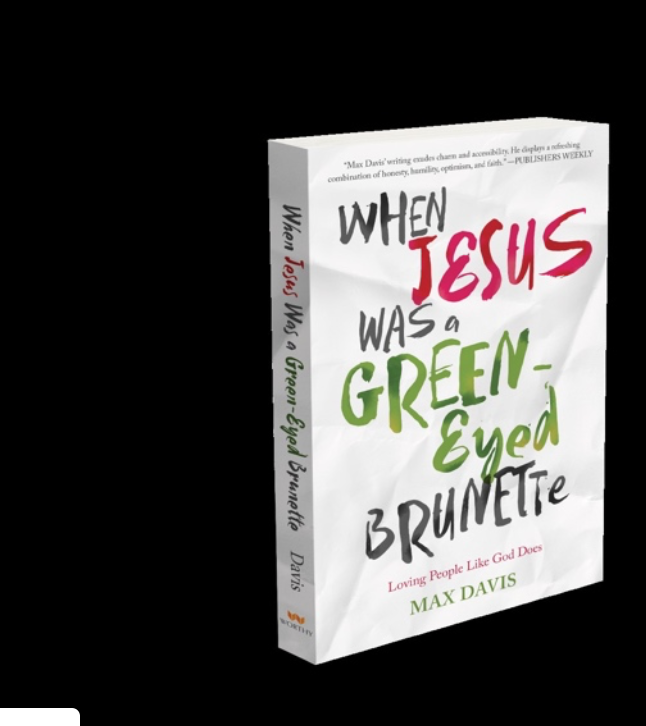 Have you ever had an experience when — days or weeks or months later — you realize that it wasn’t a coincidence that certain things happened? That maybe the moment you had or the person you met was part of a much bigger plan? in When Jesus was a Green-Eyed Brunette, Max Davis describes many such situations where the presence of God was an obvious (even if not until later) element.

There have been several of these sorts of experiences for me. I can look back now and realize that I was kept from a particular situation or a prayer was unanswered but really the hand of God was at work protecting me or guiding me to the right path.

But He’s also shown up in people. Folks who have entered my life — sometimes only to disappear or slowly fade into an acquaintance of sorts — and changed me.

I’ve had friends over the years who were with me in times of crisis and growth. These friends and I had daily phone calls or messages and talked about literally everything. In those moments, I never thought that maybe we wouldn’t be that close in the future.

But as our mutual hurts or disasters dissipated, so did the friendship. I’m not saying we aren’t friends at all or don’t still like one another, but some of those relationships just aren’t as deep any longer. And I think this is ok.

As Davis describes with various anecdotes in his book, Jesus shows up in ordinary people just when we need Him most. And we may not realize it at the time, but the evidence is quite clear when we look back and see how much we changed or grew or survived because of the people God placed into our lives.

I often think of my own husband as an example of someone God gave to me just when I needed him. Having come out of a divorce and trying to find myself again, Math Man is quite literally the perfect match for me. Without a doubt, I recognize that he is a blessing and a gift.

Max Davis is the author of over 20 published books and has been featured in USA Today and Publishers Weekly and has appeared on The Today Show and The 700 Club. He holds degrees in Journalism and Biblical Studies and is a much sought-after speaker for churches and organizations worldwide. He and his wife, Alanna, live on 50 beautiful acres in Greenwell Springs, Louisiana.

Want to win a copy of your own? Enter in the Rafflecopter below!

Many thanks to Propeller Consulting, LLC for providing this prize for the giveaway. Choice of winners and opinions are 100% my own and NOT influenced by monetary compensation. I did receive a sample of the product in exchange for this review and post. Only one entrant per mailing address, per giveaway.  If you have won a prize from our sponsor Propeller / FlyBy Promotions in the last 30 days, you are not eligible to win.  Or if you have won the same prize on another blog, you are not eligible to win it again. Winner is subject to eligibility verification.