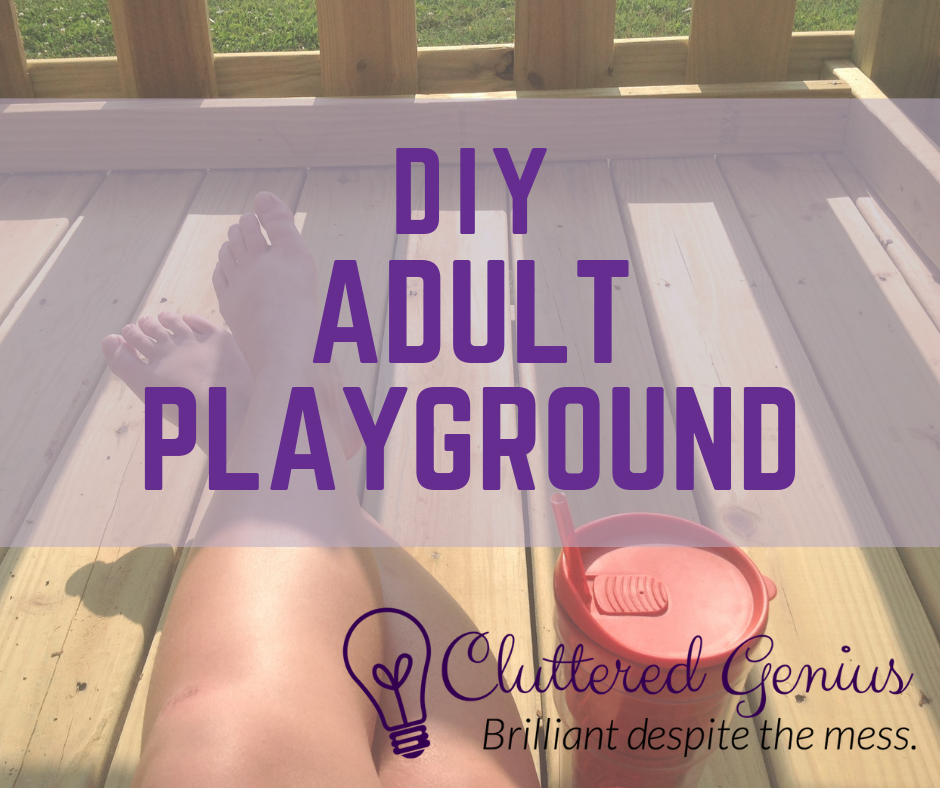 A few years ago, Math Man embarked on the journey of building our kids a playground. The one we already had was old and falling apart. He decided that with four of them trying to play — one who was nearing teenage years — it would be much safer to build anew. He was totally right, and things turned out amazingly. Now we’re at the point where it’s time for the adults to have a playground. Because he loves me and adult-sized Lego sets, he’s almost finished building our DIY Adult Playground.

Instead, there are places to sit, a roof, and a spot for a fire pit. Because what do adults like to do? Sit. And talk. And relax. Boom. (For the sake of clarity, it’s basically a U-shaped gazebo or deck.)

The goal is that when the kids are going nuts on the kid playground and swing set, we’ll be able to sit and (kind of) relax while paying attention and being nearby.

He started by setting up the left side of the structure. At first we argued over what in the heck we meant. I kept calling it a U. He kept calling it a rectangle. Finally, I let it go because we do speak male/female or math/English, and I knew there was a simple misunderstanding. Eventually, he said, “Yeah, it’s a digital U,” and I just nodded (because that’s basically what I was saying in the first place).

The posts were the hardest part, so I had the fun of helping him hold things up while he ensured the level both vertical and horizontal. He tacked on supporting boards to keep things from keeling over.

Once he built the first side, he went ahead and put on the deck boards. This helped to square the structure up a bit and gave him a good plan in his head for how he’d do the other two sides.

Did I mention that none of this was written down or drawn out. His name is Math Man, after all. To watch him stand there and calculate angles, lengths, etc., might have made me develop a crush on him all over again. 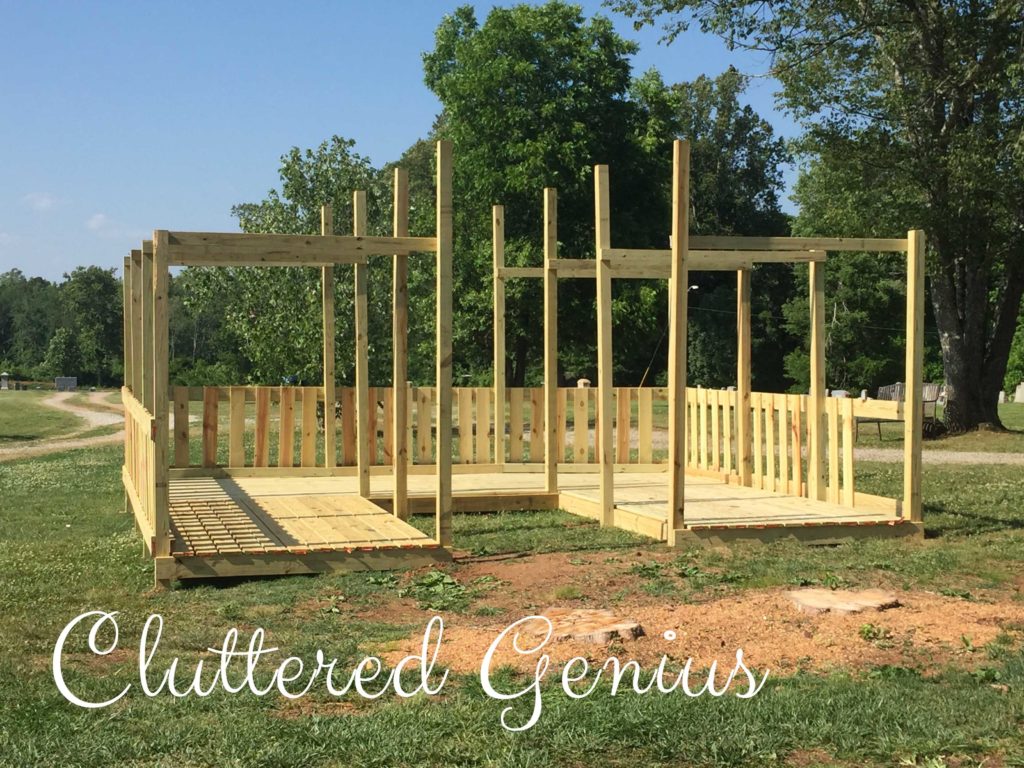 After the three sides were built, it was time to start considering how he was going to add the structure for the roof line. He did this slowly but surely, and he only bumped his head one time. Of course, he didn’t tell me until well after it had happened. 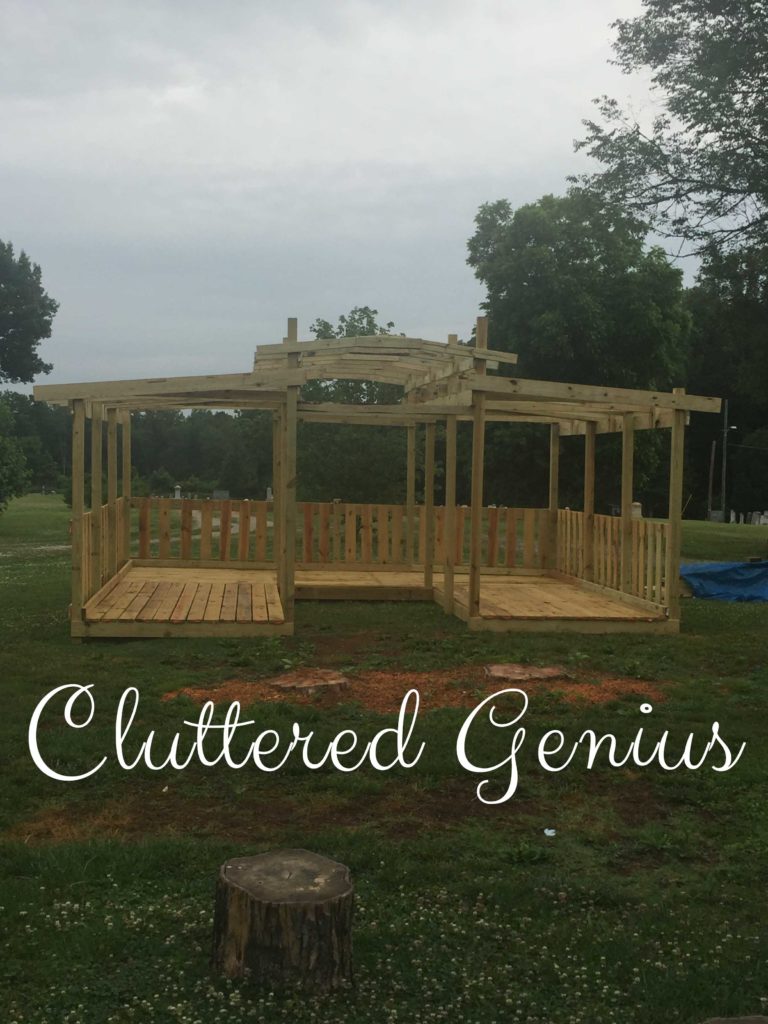 Now, we wait for our roof guy to come and help us get the metal roofing on so that the Adult Playground matches the kids’ playground. In the fall or next summer, Math Man will paint the boards to match those on the rest of the playgrounds. The boards need to season a bit first.

Once the roof is on, he’s going to create a fire pit in that U shaped opening. I’ll be sure to come back and share that progress once he gets to it! It won’t take him long because, of course, he already has it all schemed out in that brilliant mind of his.

Isn’t this so cool? I’m super pumped for us to sit out there the first time with a choice beverage or to have friends over and just hang out. To watch the fireflies and listen to the crickets while our kids enjoy summer time? Priceless.

This post is part of a linkup of bloggers thanks to Baking in a Tornado and the Blog with Friends challenge. June’s theme was Fireflies. Check out what my bloggy friends posted about:

Cupcake Firefly Centerpiece from Karen at Baking in a Tornado

Shrimp Summer Salad from Dawn at Spatulas on Parade

Escape the Ordinary from Melissa of My Heartfelt Sentiments