In the quiet aftermath 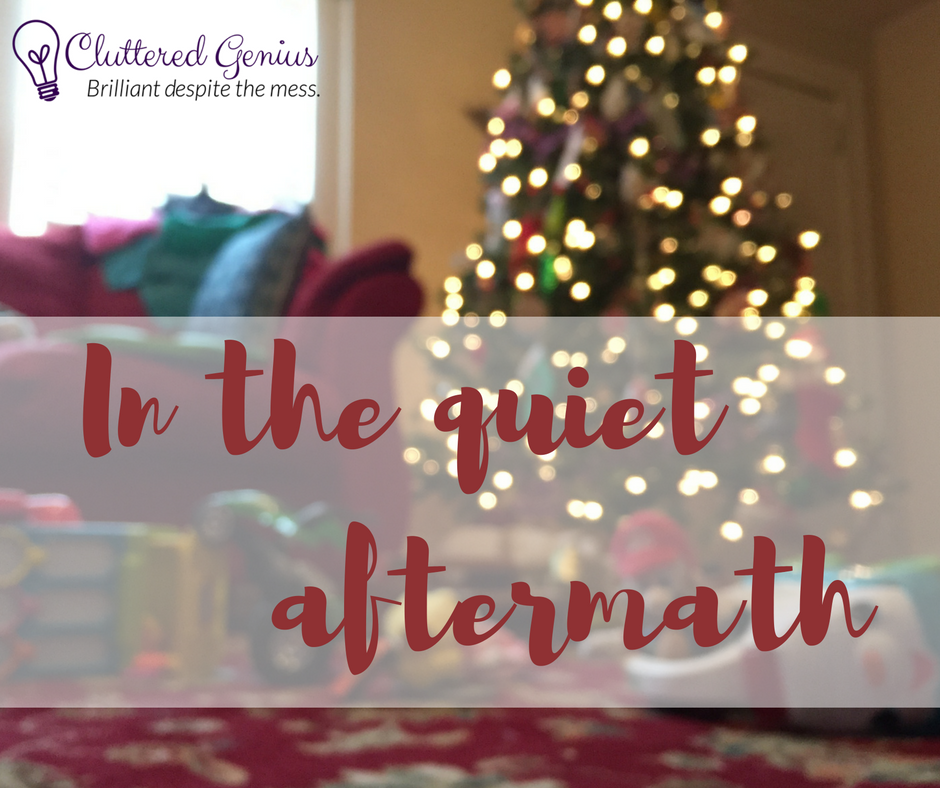 Christmas was two days ago. Leading up, Math Man and I had planned carefully to be certain each of our four kids received a fair amount of presents. We wanted the quality of their gifts to outweigh the quantity, and until the very last day we were checking our list — and checking it again. The day came and our kids were, surprisingly, calm and gracious. Then, it got loud as toys were opened and batteries were added. Two days later, in the quiet aftermath of the toy season, I’m finding my heart swell just a little more.

Today, Math Man has wrestling practice. He’s been gone for about fifteen minutes, and the baby is still asleep. The boys are sitting at the kitchen table eating a chocolate bar — be quiet — and some milk while they watch random KidsTube shows. I hear them giggling about adding the chocolate to their mouth after pouring in the milk and swishing their faces around. Here and there, they throw in the word “poop” and dissolve into laughter.

In a few minutes, I’ll go get the baby. She’ll snuggle my neck and hold her Monkey and Emma (her newest stuffed monkey) close while I bring her down the stairs into the bright lights of the kitchen. She’ll request juice. She’ll tell me she needs “fooooood,” and the quiet will begin to lessen.

Later, when Sassy Pants gets back, they’ll all probably start fighting. I’ll try to ward this off by offering the cookie dough in the refrigerator. But, as always happens when the four of them get back together after being apart, there will be a battle for who’s-in-charge until tomorrow morning.

They’ll go to sleep tonight. I’ll look around this tornado-wrecked house and feel the frustration mounting. Why can’t anyone clean up after themselves? Why do we have so many freaking toys? No one cherishes anything they have.

And then I’ll stop to peek at the monitor while they’re sleeping, and I’ll turn to Math Man and say, “Just look.”

It’s loud most days. This season makes us forget sometimes how beautiful these precious babies are. We get swept up in the hustle and bustle. We focus more on the clearance sales than the true heart of giving.

Until they put their heads on my shoulder or their hands in mine. Until they grab my face and play with my hair. Until they say, “I love you,” before jumping off my lap and running away again.

May you find the quiet in the aftermath and focus on all of the beautiful (albeit fleeting) moments.