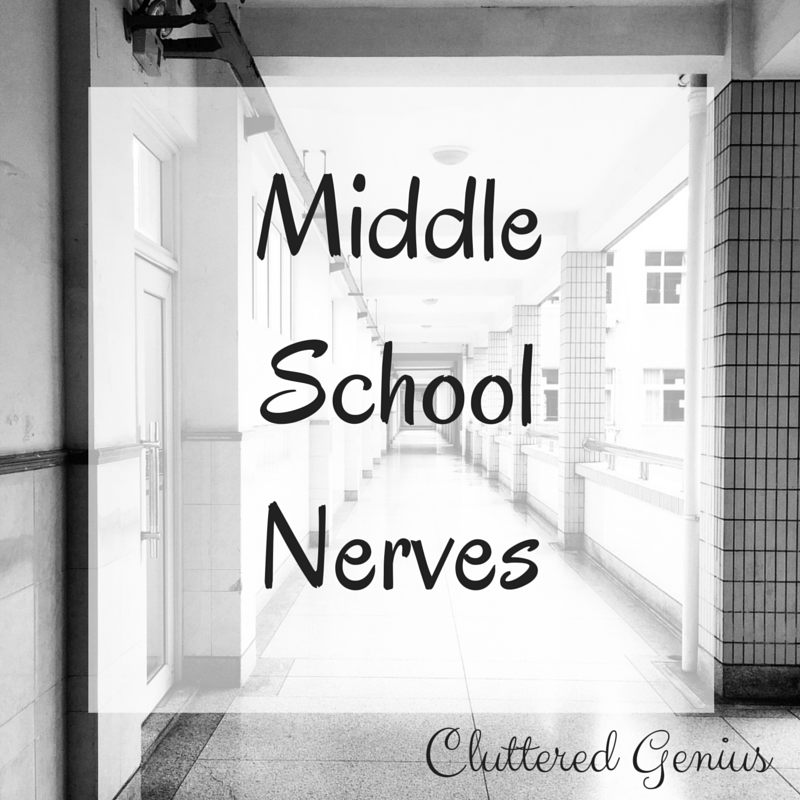 Last night, we went to Middle School information night. Somehow, I’m old enough that my oldest is starting middle school in the fall. When did that happen?

Let me take a moment and express how I feel about this here:

At the beginning of the meeting, the middle school principal asked two questions. First, he asked how many of the soon-to-be 6th graders were nervous. Very few (if any) raised their hands. I’m not surprised. No one at that age wants to admit they’re freaking out.

Then he turned to the parents and asked if we were nervous. Quite a number of hands went up. Not mine.

My nerves are fine. I’m actually completely fine with the fact that Sassy Pants is about to head into another (very big and very important) chapter of her life. I have no qualms about her ability to succeed. She is and always has been a leader. At about 4 years old, a stranger at the pool referred to her as “future mayor.” She doesn’t meet a stranger. She fits in to whatever situation. She is rarely nervous. And if she is, she hides it well.

I’m not really nervous about her. What I am nervous about is the fact that my baby, my oldest, is old enough to be in middle school and this brings a whole host of PTSD-esque situations to the forefront of my mind. It also tells me that I’m older than I like to believe I am.

Middle school was not pretty for me. While I did make some serious life-long BFFs, there were other situations that made it hard. Plus, there was the awkward 7th grade perm, the boys that I wouldn’t talk to because I “liked” them (that makes sense), and almost failing out of life science.

I’m doing my best to not force my experiences and memories on Sassy Pants. She is a totally different kid than I was, and I am trying to remember that her life is far different from mine. In the third grade, for some reason, I became very shy. Where I was always comfortable about singing or acting in front of people, I became uber aware that folks were looking at me and I started being embarrassed by any limelight. (I broke out of that somewhere around my senior year of high school.)

Sassy Pants is not afraid to be the center of attention. She’s loud. She’s bright. She’s amazing.

She is going to take middle school by storm. I have no doubts in my mind. And you watch. She probably will be mayor some day.

Do you have kids who are going to middle school or already survived? Tell me about it!

I’m participating in the A to Z Challenge. I had to put M and N together because, well, life.