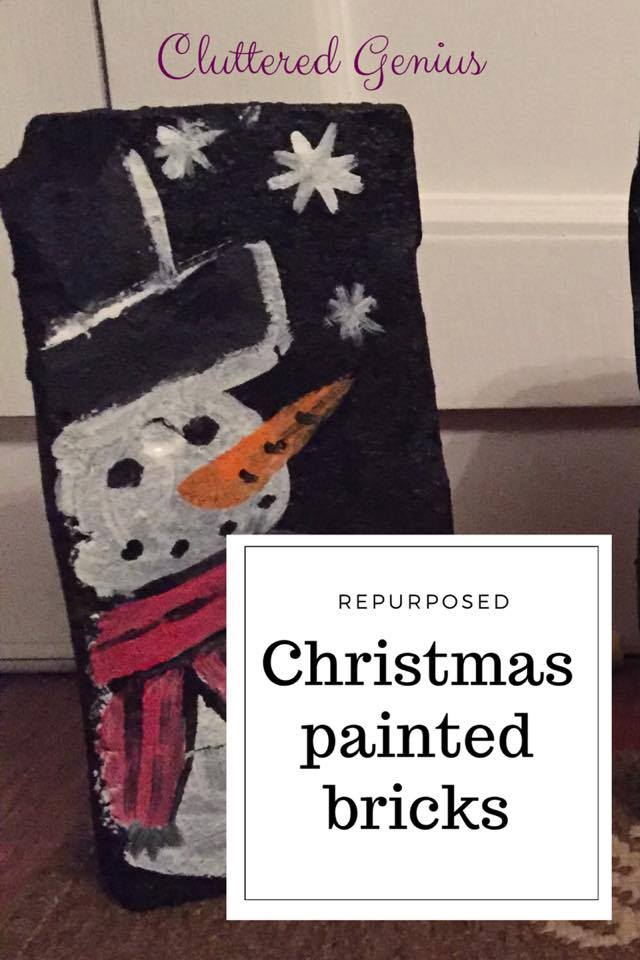 For years, I’ve fought with various options for hanging stockings. The fancy ones I’d spent all the money on at the different stores (because there were several variations) either fell apart or couldn’t withstand basic stuffed stockings. In fact, a couple of them broke because they fell while holding said stockings. This is how I finally decided I would re-purpose some bricks into Christmas Painted Bricks.

The idea didn’t come that easily, actually. For the last few years, we hung stockings on the mantle with some of those self-stick doodads that pop off relatively easy. While they worked and were strong enough to hold a filled stocking, they weren’t in any way pretty. And instead of popping them off at the end of the season (frugal and all), we just left them there. Ugly.

This year, in our new-to-us house, I didn’t want to do the self-stick hook nor did I want to spend the money on special stocking hangers that would likely just anger me. I decided I could do it myself (said like a 2 year old) and considered the ways in which I could accomplish the task.

Thanksgiving day ended, and we began pulling out Christmas decorations. Math Man was in the spread-lights-all-over-the-world mood and started decorating the kids’ TV/game room with stringed colored lights. Problem was, they wouldn’t stay still, and — again — I didn’t want to do anything permanent to the beautiful mantle.

Math Man asked me to go and grab a solid brick from our ginormous collection in the back yard. I was surprised that we had any bricks that were solid, and that was my light bulb moment: I could paint some and they could hold stockings!

The first step was to clean off the dirty old bricks. Flash and Diva helped me. 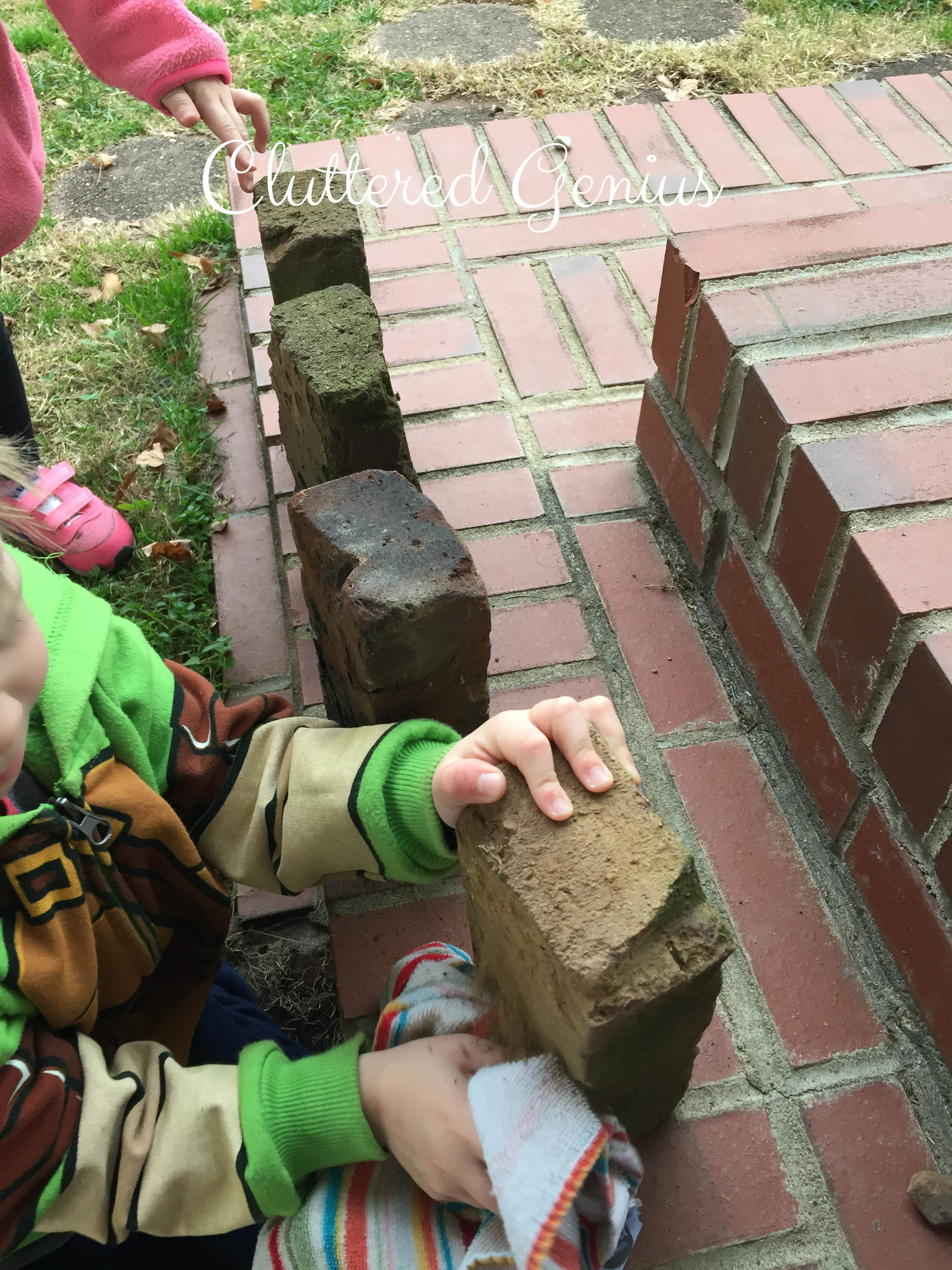 Next, I spray painted them black to give them each a good base of solid color. I was certain that anything I hand-painted wouldn’t do well or would peel without having some sort of foundation. I only really chose black because it’s what I had on hand. (I was a little dumb and didn’t think to put something under the bricks. So, we have 4 perfectly brick-sized rectangles on the lawn. It didn’t even occur to me that we wouldn’t be cutting the grass (and therefore losing the paint) any time soon. Oops.) 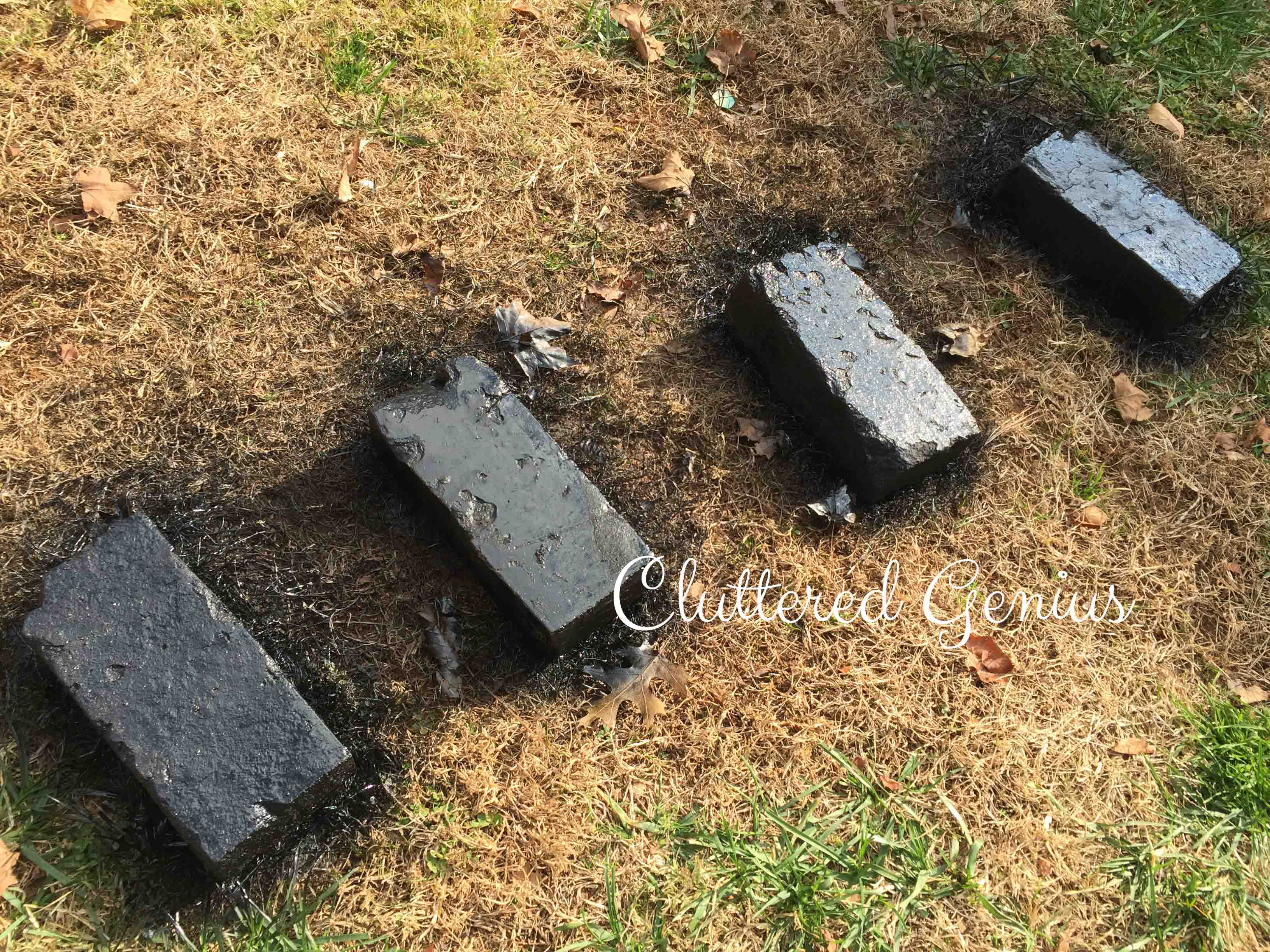 When the spray paint dried, it was time to paint. In all honesty, I gave them almost 2 days to dry but only because I didn’t get back to them for that long. I’m sure they would have been ready prior.

Pinterest was my inspiration. I simply searched for various keywords like snowman or ornament to find an image I liked. Then, I created a similar image or one simply inspired by the pin. I was pretty pleased with what I created. 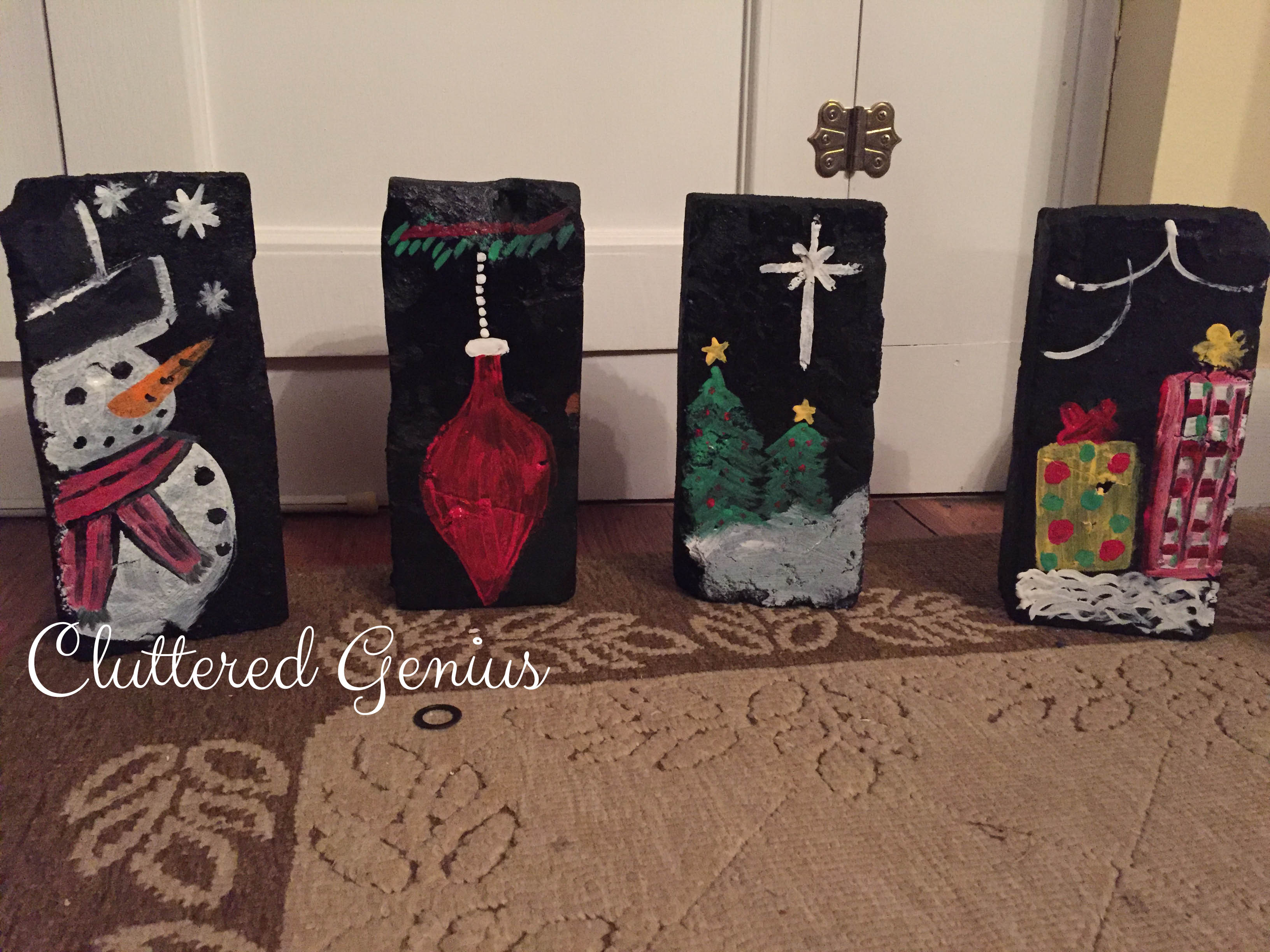 In retrospect, I think I would have made a “traditional” gift painting rather than the one I tried to create based on the pins I found. Both Math Man and Sassy Pants told me they thought it looked more like buildings rather than presents. Oh well!

So right now, we have the bricks just sitting on top of the stockings. We recognize that when Santa arrives and fills those stockings, he’ll likely need to just lay them on the couch or the table that is directly below. I was extremely pleased with the way they turned out, and I sort of keep just looking at them. Math Man’s favorite is the snowman! 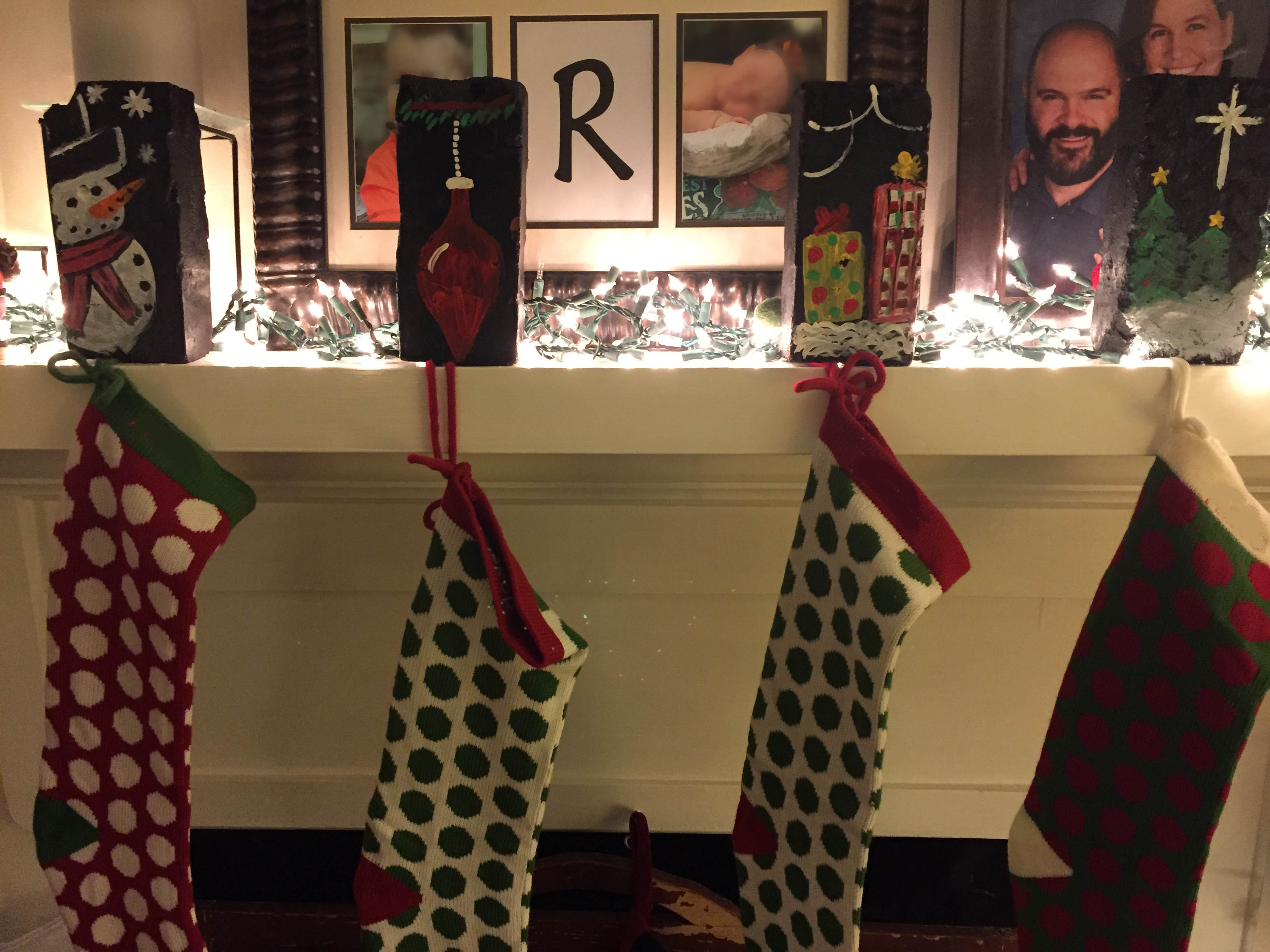 What have you done that’s “smart” for items around the house? 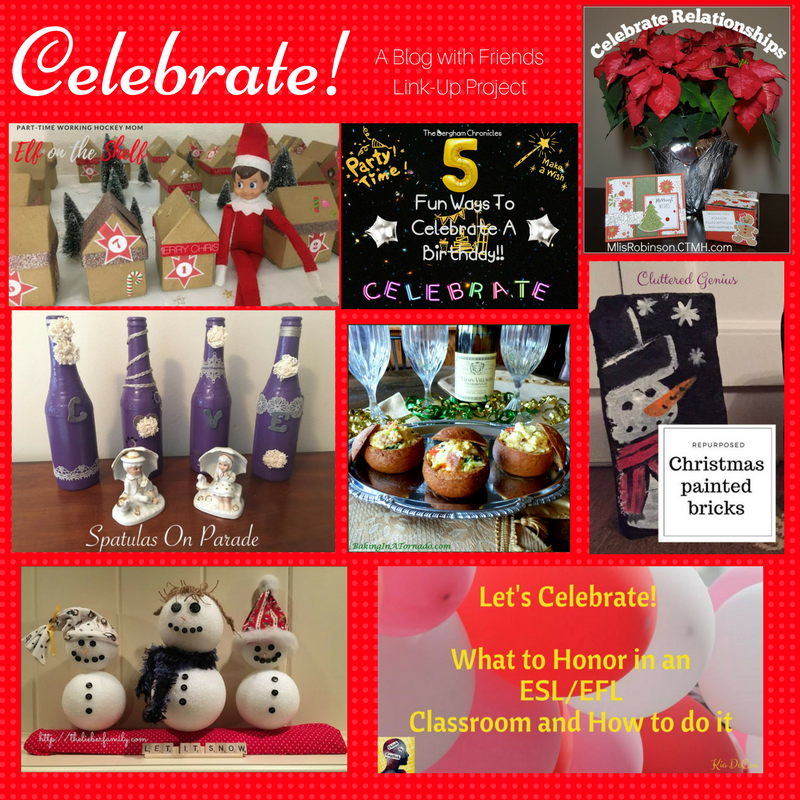 Baking in a Tornado with Brunch Scramble Rolls

My Heartfelt Sentiments with Celebrate Relationships

Spatulas on Parade with Bottle on a Shelf

Think in English with Let’s Celebrate! What to Honor in an ESL/EFL Classroom

Part-Time Working Hockey Mom with Elf on the Shelf

The Bergham Chronicles with 5 Fun Ways to Celebrate a Birthday