Use Your Words: The Beach 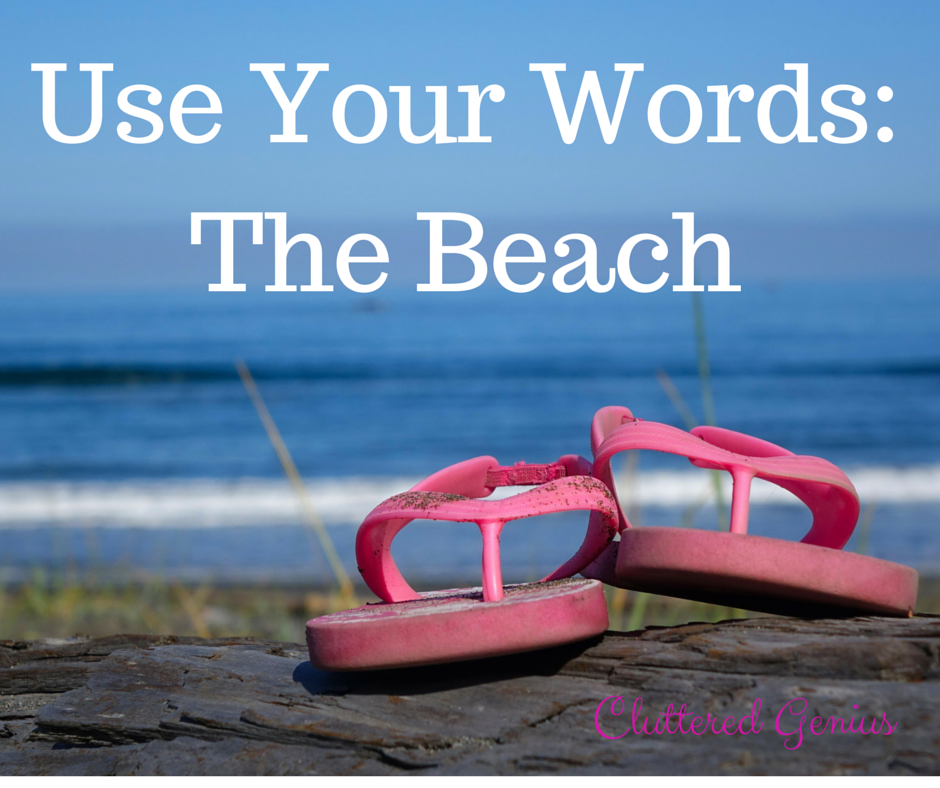 Trying something new today with my bloggy friends. It’s called Use Your Words. For this challenge, we had to submit random words or phrases. Then, we received a random set of words/phrases from another blogger who is participating. And today, I’m to have a blog post using those words. Let’s see how this goes:

My words are:
jello ~ scandal ~ wasp ~ wisdom ~ suspended
They were submitted by: http://dinoheromommy.com

This past week, we went to the beach. Now, you’d think I was a little bit off my rocker considering that we have four kids — three of whom are preschool age or younger. But, we went.

Math Man and I had decided that we were being held hostage by our children. We weren’t going anywhere because we were afraid of what might happen. Would Flash run away? Would the Animal choose to sleep? Would Baby Diva be able to handle the road trip? And would Miss Sassy Pants be bored out of her mind considering she was stuck with all these littles?

We sought the advice of our friends and family to get ideas for how to manage the trip. We were offered several nuggets of pure wisdom like: take fans to the beach, they’ll sleep when they’re tired, use baby powder to get rid of the sand, wear big hats on the beach to ward off the sun.

There were some we tried and some we forgot (I totally packed the baby powder and then totally forgot to use it).

Math Man and I had every intention of going to the grocery store and thus not eating at restaurants the entire time. Didn’t work. We got there, and the kids were so excited to go to the beach that we just went down and thought, “We’ll get food later.” Needless to say, we had limited snacks (not even any jello!) and then ordered take out the rest of the time.

The hotel itself was pretty awesome. I’d been worried about some of the reviews that I’d read. You’d have thought that this place was a disgusting joint based on some of the people’s reviews. I guess there are some who just can’t handle not creating a scandal and causing issues. They were wrong, fortunately. Sure, there were some minor things we could complain about (we could have used some laundry soap, thanks), but all-in-all for the money, this was a great deal for our size family.

Now, going down to the actual sandy beach caused other interesting issues. We tried to have the boys wear their water shoes on the first day. While it kept their feet from getting burned, the vast amount of sand on and in those shoes made it near impossible to get back on the next day. So, we tried barefoot. Big mistake. Then, we went with their slip-on shoes, and that was the winner.

But it was hot. Hot, hot, hot down there. We had a little pop-a-cabana to attempt to grab shade, but even with that, we still had tons of sun pouring in on Baby Diva. I suspended some towels over the top of it, but that kept the breeze from flowing through the little openings easily. It was a Catch-22. Deal with the sun pouring in or bake. Luckily, she still decided to nap a little here and there so the older kids could play.

I think my biggest surprise of the entire trip was Miss Sassy Pants’s eventual refusal to go into the ocean. Keep in mind: this kid has been going to the beach regularly since she was somewhere around 18 months old. In fact, some summers, she has gone 3 and 4 times. She’s a beach bunny. It was weird to have her refuse to go into the water and just want to hang with me in the tent with the baby. She complained of some spots on her legs that hurt as if she’d been stung by a wasp — I did actually see a cut on one toe that I suppose made that complaint legit. But mostly, I was really confused by her refusal.

We’re home now, and everyone is sort of back to normal. Thank heavens we cleaned the house before we left – it was so nice to walk in and not have that added stress on our backs.

What did you do this summer that was surprisingly enjoyable?

10 thoughts on “Use Your Words: The Beach”