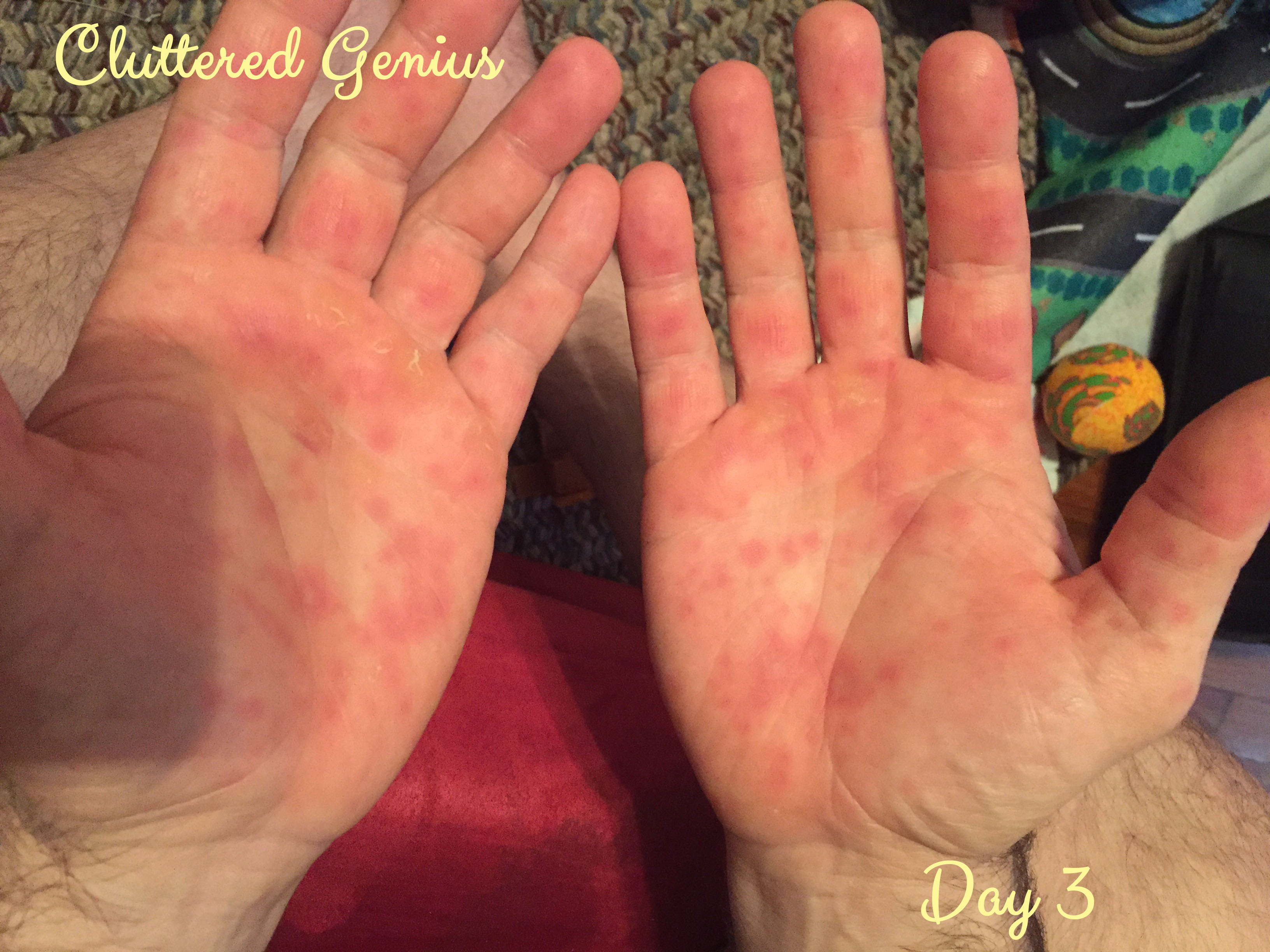 The last two and a half weeks have been a blur. It actually feels like we’ve been through several months instead of just 19 days. It also appears that we aren’t finished. Let me paint you a picture:

On a Wednesday night, almost three weeks ago, Baby Diva (8 months) struggled to sleep. When I went up to her, she was drooling like crazy and felt a little hot. After I nursed her, she seemed cooled down and went back to sleep. The next morning, however, she refused to nurse. I was perplexed as she usually doesn’t do this. But I needed to be out of the house and on the road in less than an hour, so this change was also inconvenient.

Frantically, I pumped and left the bottle with Math Man. My mom was on the way over to watch the baby, and it would all work out. This would be the first day I was away from her this long, and of course it was the first day she flat refused to nurse.

When I got home, she hadn’t really eaten all day. She was irritable. She nursed frantically but couldn’t be made comfortable. That night, she ran a fever again.

Fast forward to the next day, and she’d barely nursed and just couldn’t be happy. She also developed some spots on her diaper area and face.

I took her to the doctor. She did have an ear infection, and our pediatrician quickly said but then dismissed, “It looks like Hand Foot Mouth.” After looking her over, she determined it was more likely diaper rash and spots from drooling and fever from the ear infection.

The next day, more spots showed up. Then, I received a text from a friend: “Do you have any home remedies for Hand Foot Mouth?”

And guess what? This friend and her kids go to church with us and our kids had spent the previous Sunday together in the nursery.

Miss Sassy Pants (10) developed a fever. No matter what I did, I couldn’t bring it down much below 101. She had chills. She was sleepy. Then, she developed a sore throat.

That night, the Animal (4) developed a fever. His throat was red.

When I looked in Miss Sassy Pants’s throat on Monday morning, I saw spots. I had done enough research on HFM to know that the high fever and then sore throat with spots were symptoms.

Miss Sassy Pants finally broke her fever. But her throat was horrifying. She was in so much pain that she could barely eat. She was also devastated because she and her dad were supposed to go on a trip. She had to miss it.

A week now since Baby Diva first had her fever — Math Man told me he felt awful. I assumed it was a result of being up with the Animal all night, but he told me that the hair on his legs actually hurt. I asked him to stay home, but he had exams to give and is generally not one to miss a day of work.

By 11 am, Math Man was calling me to let me know he was on the way home. He said he felt so awful he just couldn’t make it any longer at work.

When he got home, it took one simple touch to his forehead to know that he was on fire. By noon, he was in bed. We didn’t see him again until later that night.

My boys started getting little spots on their hands. They looked sort of like blisters and sort of like henna tattoos. Miss Sassy Pants had no such spots, and Baby Diva’s were starting to go away.

I wasn’t shocked when Math Man, on Thursday afternoon, started finding some spots on his hands. 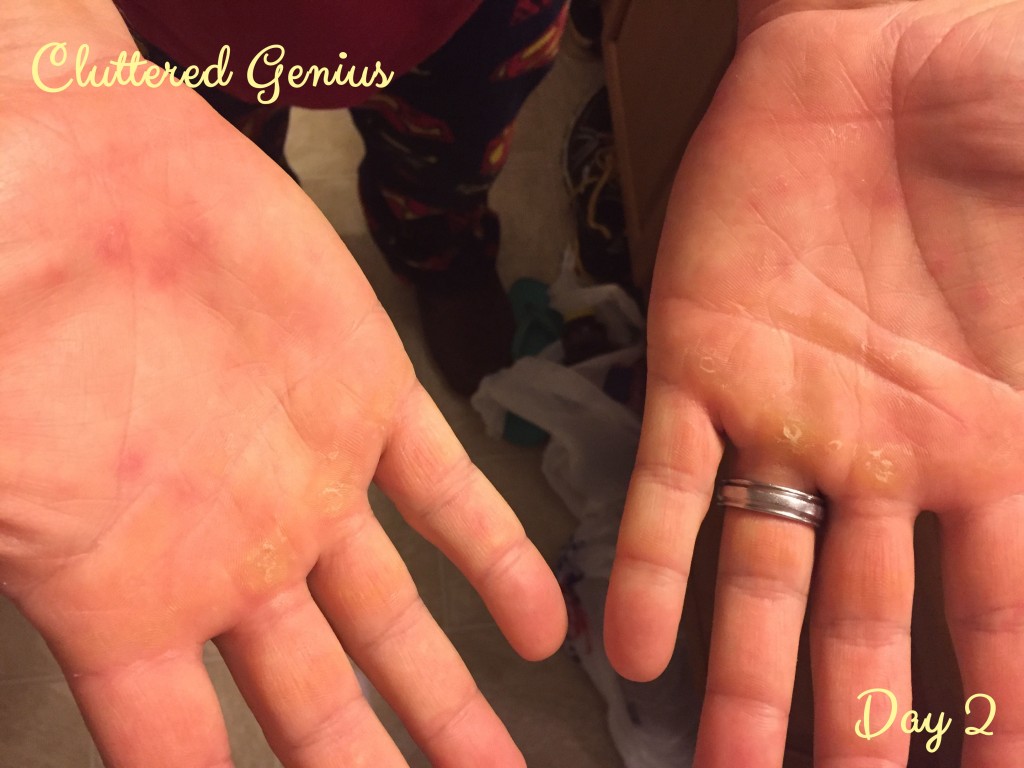 On Friday, his palms were covered. His face started breaking out. His beard and scalp had marks. He said he was hurting. My husband doesn’t say he’s in pain unless he’s really in pain. So I knew this was no joke. 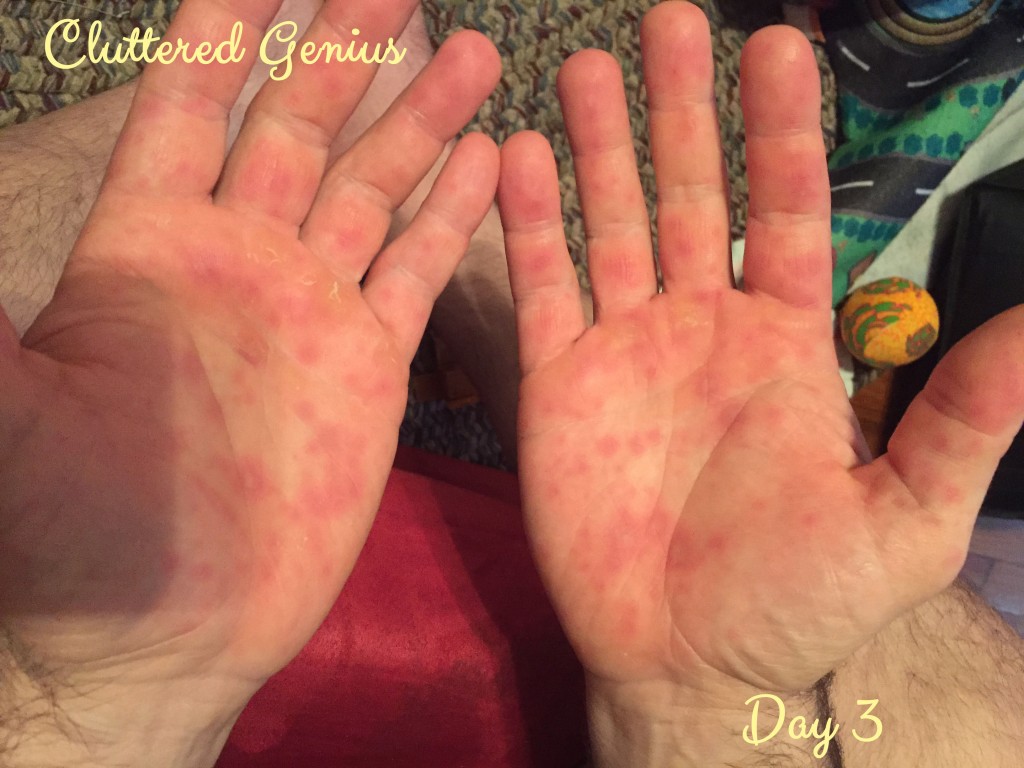 Saturday was worse. He wanted only to sleep, but he hadn’t slept through the night since Tuesday night. He was on his fourth night of no decent sleep. Motrin wasn’t helping. Benadryl wasn’t helping.

I encouraged him to use coconut oil on his face and head, at the least, since he was complaining that the dryness around his mouth was keeping him from opening wide enough to eat.

He was sustaining himself on cottage cheese, protein shakes, applesauce, the occasional mac-n-cheese, and coffee. Almost anything else burned. 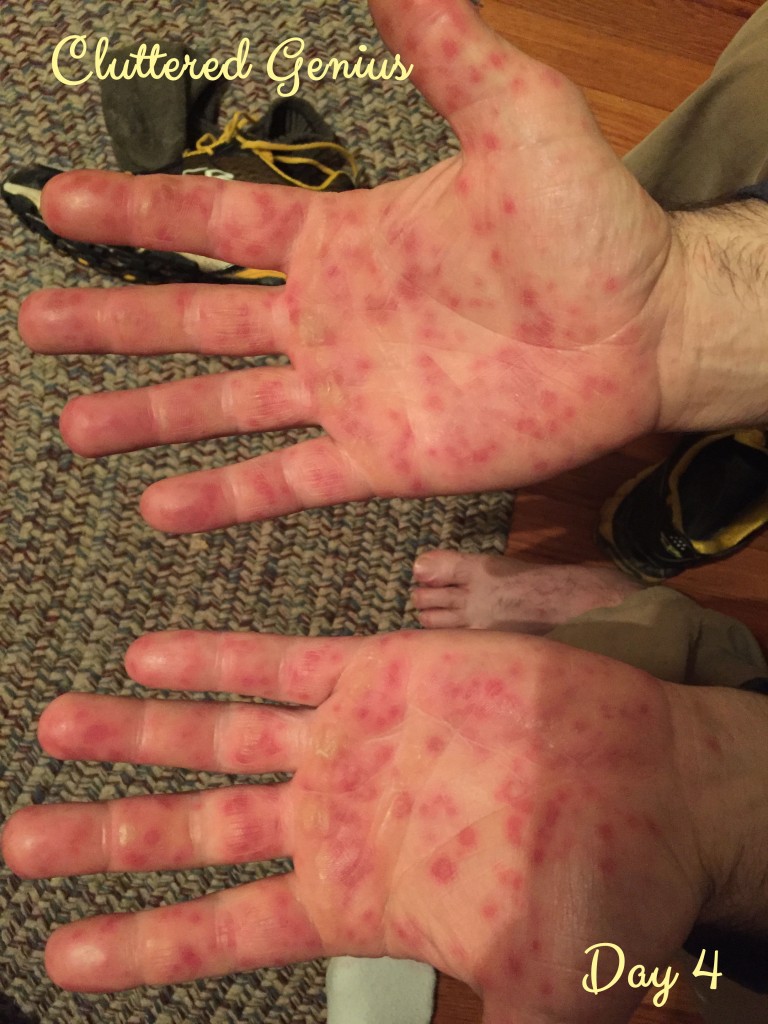 A week later, on Wednesday — 2 weeks after the baby and 1 week after Math Man — all of the kids were ok, but Math Man was still in pain. He said that his hands and feet felt as if they’d fallen asleep and were trying to wake up. That pin-pricking feeling that is not all together awful but would be if it didn’t stop. And it wasn’t stopping.

Math Man kept rubbing his hands together. He said they were beginning to itch. Thank goodness for a snow day here at home so he didn’t really “miss” work.

Then, he started realizing that the spots were beginning to get so dry that places were starting to peel. Annoyed by that itching and the discomfort of the peeling, he started applying lotion on a regular basis.

Today, 19 days after the entire ordeal began, we’re watching as his hands continue to crack and peel. I’m not sure how he’s resisting picking at everything, and I’m crazy impressed by how much he’s still barreled through and done (helped me with the kids, cleaned house, going outside to play) despite how he must be feeling. 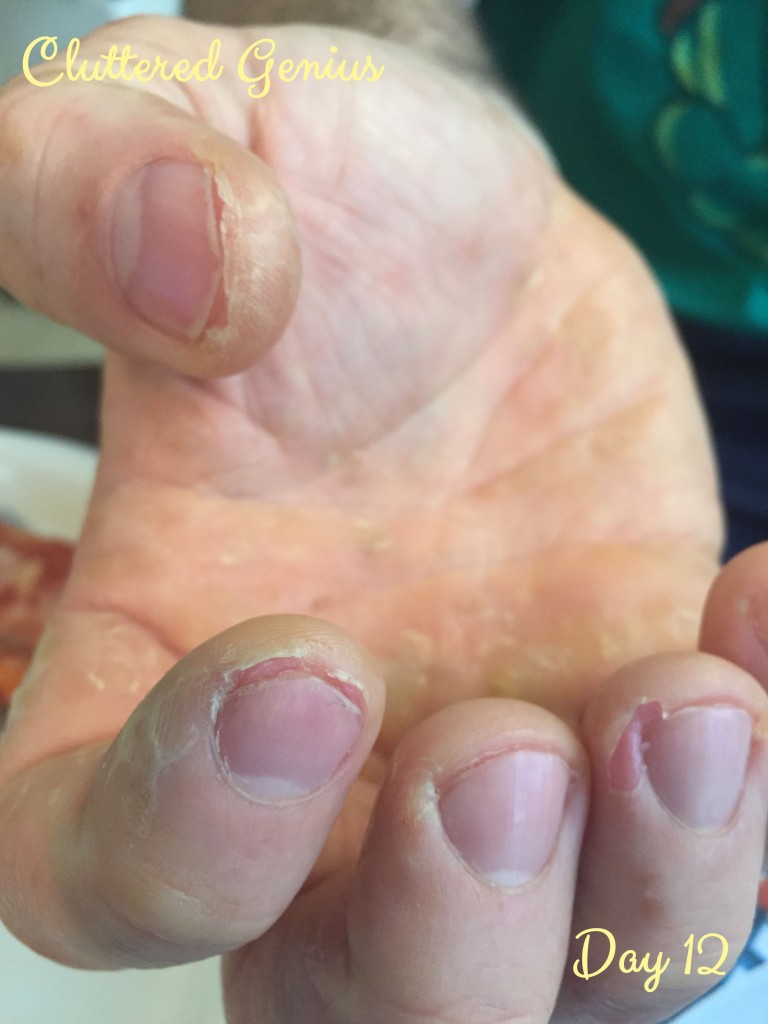 Bottom line, adult hand foot mouth disease is nothing to sneeze at. It starts as a horrible fever and body aches and chills. Then comes the throat. Then the spots and blisters. When you think it’s almost over because spots are fading, the itching and peeling begins.

I’m not certain how or why I have avoided this. Math Man keeps saying he’s so glad I didn’t get it (thank you). Not only would it have been hard to simply be a mom while feeling this way, he is determined that I couldn’t have handled it. I wanted to be offended, but he’s right. Knowing how much pain and anguish he’s been in, I’d have simply cried a bunch.

Have you ever seen or experienced adult hand foot mouth disease?

October 2018 UPDATE: This post has received a lot of traffic recently, and I hate to hear that more adults are seeing this. Math Man’s hands and feet finally peeled so badly that I had to use nail scissors to cut the dead skin away (ew, but sort of mesmerizing). The skin on feet, especially, was brand new, perfectly pink, baby-like skin. It looked nice, but it was ultra-sensitive.

It has now been almost 3 years since I wrote the post originally. Baby Diva never did go back to nursing, so I pumped and fed her a bottle until right after her first birthday. Math Man still talks about this being the literal worst pain and discomfort he’s ever experienced.